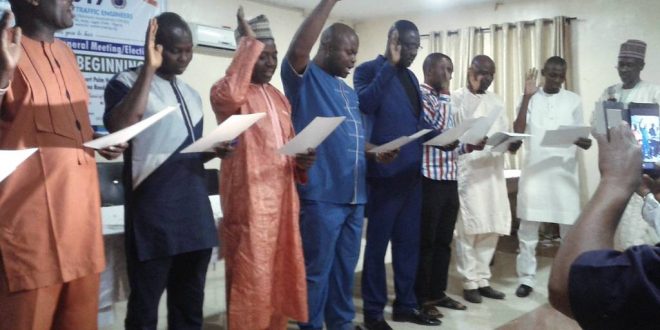 NATIONAL Association of Air Traffic Engineers (NAAE) has elected new officials that will pilot the affairs of the body for the next two years.

It would be recalled that a spanner was thrown on the wheel of NAAE  when the outgoing executive of body led by Isaac Orishaleye, an air traffic engineer was unceremoniously booted out of office by the then Management of Nigerian Airspace Management Agency (NAMA) in 2013.

To correct the injustice that lingered for almost five years, a reconciliatory committee headed by Mojisola Dokun returned the instrument of office to the 2012 executive and mandated it to conduct a fresh election that was held at the weekend.

The essence of this arrangement was to correct the anomaly and interference which led to the sack of the executive, their suspension and eventual sack by NAMA.

At the height of the crisis engineered by the then management of NAMA, former Deputy National President, Anukwu Chinedu Reginald was moved to Akure, same with Azeez Akinola Olabisi who was the treasurer by then. The Finance Secretary was moved to Bauchi from Jos. Because of the pressure on them, many of the members resorted to fate that one day, justice would prevail. And for almost one year, they held on that justice and truth would prevail.

In his welcome address, Orishaleye thanked God and all NAAE members for the singular privilege accorded him to serve NAAE in the capacity of President.

He lamented that the association was for many years in wilderness, orchestrated by events that happened five years ago, stressing, “We indeed have to start all over again if we want our tomorrow to be glooming and those coming after us to have a place in this industry.”

He particularly expressed worry that the welfare packages of their colleagues, particularly in NAMA have remained stagnant over the years despite having three consecutive Managing Directors as NAAE members.

He further stated that the required synergy between the association and the Amalgamated Union of Public Corporations, Civil Service Technical and Recreational Services Employees (AUPCTRE) needed to effect positive change lost steam owing to deficient and illegal or imposed NAAE representation.

Orishaleye further stated that enhancing air safety requires training and retraining among others, but regretted that the act lobbying is putting undue pressure on the Directors and the Chief Executive Officers of their respective organizations.

His words, “It is rather unfortunate that the level of indiscipline in the system is at its peak. This disposition falls short of one element (attitude) qualifying our license/rating scheme and thus an abused of ethics of the profession.”

He explained that the out-gone executive inherited and concluded the process of amending the constitution of NAAE, stressing that what was awaited was the adoption in the General Assembly.

“But with the subversion of the association by negative vested interest, this process was truncated. Among items to be amended was the change of name. It was canvassed that the name be amended from NAAE to National Air Traffic Safety Electronics Association (NATSEA) in order to rhyme with International Federation of Air Traffic Safety Electronics Association (IFATSEA).

He disclosed that the association was handed over to them with actually nothing to work with, “And we were mandated by well-meaning members to conduct free, fair, and credible and an all-inclusive AGM /Election for all stakeholders in NAMA, NCAT, NCAA and Ibom.”

2It is common knowledge that those who operated the association from 2012 to 2017 refused to hand over the finance of the association to us despite various appeal from the Director of Safety Electronics and Engineering Services (DSEES) and all the General Managers in the SEES Directorate.”

“The Technical Adviser to the MD /CEO Johnson Otitolaiye and me personally begged Ebenezer Makanjuola, Francis Omeje and Opar Ojar to see reason and effect change of signatory in order for the association to function but they vehemently refused.”

Nigerianflightdeck is an online news and magazine platform reporting business stories with a bias for aviation and travel. It is borne out of the intention to inform, educate as well as alter perceptions with balanced reportage.
Previous AIB justifies ministerial approval of 5% revenue from FAAN’s PSC
Next NATCA enjoins Presidency, NASS to make airlines pay charges