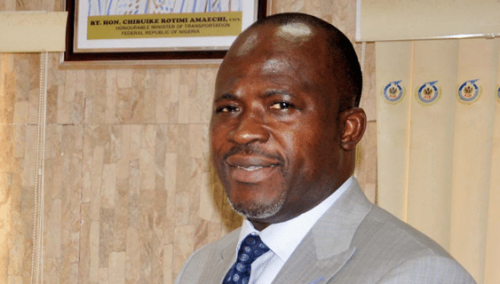 ACCIDENT Investigation Bureau (AIB), has said that paucity of funds had stalled developmental projects in the bureau and there was nothing wrong with the Minister of State for Aviation, Sen. Hadi Sirika to approve 5 per cent of the revenue from Passengers Service Charge (PSC) to the investigators from the Federal Airports Authority of Nigeria (FAAN).

Commissioner of AIB, Engr. Akin Olateru made this known while announcing that a team of officials from Singapore led by Mr. Michael Toft and the International Civil Aviation Organization (ICAO), led by Mr. Caj Frostel arrived in Nigeria over the weekend to assist AIB in the technical evaluation of its Flight Safety Laboratory and capacity development.

Speaking with journalists at the bureau’s headquarters at the Murtala Muhammed Airport (MMA), Lagos over the weekend, the AIB commissioner bewailed the criticism that trailed the approval of 5 per cent of the PSC to the agency by the ministry from a section of the industry, saying that several AIB projects were stalled because of paucity of funds.

He also pointed that AIB only gets a meager 3 per cent of the revenue from the 5 per cent Ticket Sales Charge and the Cargo Sales Charge (CSC) collected on behalf of the parastatals by the Nigerian Civil Aviation Authority (NCAA) while other agencies get more.

Olateru further mentioned that NCAA in accordance with the Civil Aviation Act 2006, gets 58 per cent, the Nigerian Airspace Management Agency (NAMA) earns 23 per cent, Nigerian College of Aviation Technology (NCAT) gets 7 per cent while the Nigerian Meteorological Agency (NIMET) earns 9 per cent of the total sum.

He explained further that of the agencies in the sector, only FAAN earned the PSC 100 per cent, adding that the same agency still collects charges for adverts, parking and landing of aircraft, land and tolls on vehicles coming in and exiting the airports across the country.

He lamented that paucity of funds had stalled the release of the over 35 accident investigation reports, due to non-training of accident investigators since 2013, stressing that the agency needed to develop human capacities in order to compete with others.

On June 5, 2017 the AIB requested from the ministry 10 per cent of the PSC collected by FAAN, citing inadequate funds in the bureau to carry out most of its projects, the ministry eventually approved 5 per cent of PSC for the bureau.

He added: “Anybody that says it is not fair for us to get a part of the PSC is wicked because who owns the two agencies? It’s the Federal Government. We all share the TSC and FAAN doesn’t share its PSC with anybody and the government in its wisdom says ‘FAAN, please give AIB 5 per cent.’ I don’t think that is too much. It is within the power of the minister to do that.

“All these things cause, money and this is what we have managed to put into the IGR side for 2017. We expect some reasonable money from the PSC to support us to deliver on some of our mandates. We still have to sit with FAAN to see how much this money is and what will the 5 per cent translate to.”

Meanwhile, a team from Singapore yesterday arrived Nigeria for the training of technical personnel of AIB on the usage of the Safety Laboratory Equipment situated in Abuja and technical evaluation of the laboratory prior to its update.

The team is expected to commence work tomorrow (Monday) on the equipment.

Olateru said that Nigeria decided to call on Singapore for the training of its personnel on the equipment as the Asian country has the same equipment as Nigeria.

He described the laboratory equipment as unique; stressing that only Nigeria had the state-of-the-art facility among the West African States.

He said: “We wrote to Singapore because they have the same equipment as ours and graciously, they have agreed to support us with the required manpower and training. The team arrived Nigeria today (Sunday) and would be in Abuja to train us on how to get the best out of this equipment.”

Also, the Head of Accident Investigation for Banjul Accord Group (BAGAIA) from ICAO also arrived in the country at the weekend from Canada for the same purpose.

Olateru explained that ICAO wanted the entire West African countries to benefit from the laboratory, assuring that with the full usage of the equipment, Nigeria would be a force to be reckoned with in accident investigation.

“Also, the National Transportation Safety Board (NTSB) of United States has agreed to come to Nigeria to train our investigators, which will come up sometime in September. They have also agreed that we should send our investigators to them to do the On-the-Job training in their establishment.

“So, these to me will really help AIB because at the end of the day, it’s about building an institution. Building institutions is not just about buying equipment, throwing money at people, it’s about giving them the right exposure, which goes a long way. To me, within the next two years, we will build a very strong institution in AIB, which can take the lead and support the entire West African countries.”

Nigerianflightdeck is an online news and magazine platform reporting business stories with a bias for aviation and travel. It is borne out of the intention to inform, educate as well as alter perceptions with balanced reportage.
Previous Ethiopian Airlines to commence Addis-Kaduna flights from August 1
Next Ishaya Dung becomes NAAE President as association elects new officials