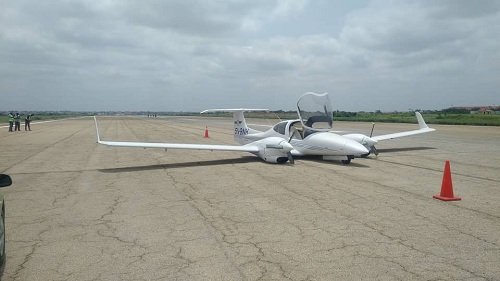 A training aircraft belonging to the to International Aviation College (IAC) belly-landed at the Runway 23 of the Ilorin International Airport on Wednesday without any casualty.

The aircraft, a Diamond DA 42 with registration number 5N BNH made the unorthodox landing at exactly 11:10am  during a training exercise to get the student prepared for their final exams.

Confirming the crash, Rector of the College, Engineer Benedict Adeyelika said the aircraft is currently under assessment by investigators from the Accident Investigation Bureau (AIB) as he said the aircraft had sustained minor damages from the landing.

He stated that it was important not to speculate the crash as the AIB were on top of the situation and the college was ensuring that it gives the investigators all the support, data they need to determine the cause.

A reliable source who spoke earlier had explained to Nigerianflightdeck that the aircraft might have experienced a landing gear problem considering the fact that the back tyres refused to pullout when the pilot was trying to land on the runway.

He said the aircraft did not declare  a ‘Mayday’ but landed spot on with its belly at the centre line of the runway.

The AIB Sokesman, Mr. Tunji Oketumbi also confirmed the Bureau has commenced investigation into the occurrence.

Nigerianflightdeck is an online news and magazine platform reporting business stories with a bias for aviation and travel. It is borne out of the intention to inform, educate as well as alter perceptions with balanced reportage.
Previous FAAN withdraws services to Gombe, Kebbi airports over N811m debts
Next @70 UBA celebrates excellent customer service at special CEO Awards gala