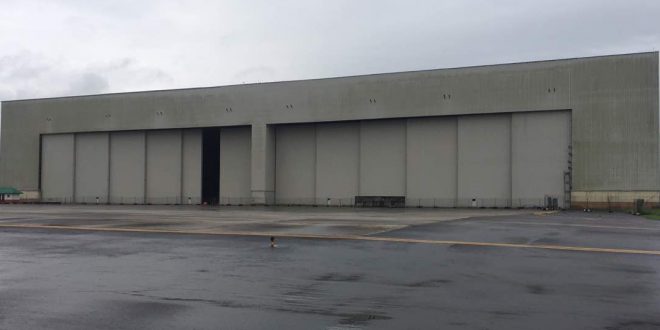 Akwa Ibom State Governor, Udom Emmanuel has said the state is on the verge of inaugurating a world class smart terminal building and that it’s Maintenance Repair and Overhaul (MRO) facility at the Victor Attach International Airport, Uyo would be operational from January.

This is just as he received commendations from his Edo State counterpart, Gov. Godwin Obaseki, who was the special guest at the reception of two additional A320-200 Airbus aircraft on lease from an European company on Tuesday in Uyo for the state’s Ibom Air fleet.

The Akwa Ibom governor who was speaking at the event said people were already coming to convince the government to lease the MRO out but that the MRO is an investment, being constructed with naira no matter how devalued, which would earn dollars.

Gov Emmanuel said,”Our terminal building is world class in Africa. Our MRO is world class. If you find one today in the entire Gulf of Guinea, tell me I will break down this one and construct another.

” Look at our MRO, what you are seeing here can take two 747 aircraft and can also take eight CRJ aircraft, the type we are flying for servicing at the same time.

“This is the only MRO today in this part of the world and these facilities are not built with local currency but we are building this MRO with naira that does not have value.

“I invest in areas where we can have returns on our investments. Right now without blinking an eye I can make over $30million with this MRO of we decide to sell but we are not selling, we will make foreign exchange from this investment.

“Airbus is on us to come and lease our MRO for all their regional flights but we are not selling.

“We are going to open up this place ( MRO facility) from January next year for commercial activities and we are going to earn in dollars,’’ Emmanuel said.

He thanked the Board, Management and Staff of Ibom Air for making him proud, stressing “they have done very well.”

Gov. Obaseki who spoke at the event said Akwa Ibom has become the flagship state in the country for its efforts at investing and achieving significant strides in the aviation sector.

Obaseki said Akwa Ibom is a flagship state in the country for its efforts at investing and expanding the aviation sector.“Ibom Air is always fully booked. Let me thank you on behalf of Nigerians,’’ Obaseki said.

Udom said the new addition to the fleet of Ibom Air would expand its carrying capacity and boost employment opportunities in the state by 40 per cent.

“With this new capacity coming on board, we are delighted to inform our passengers that we have increased our offerings, providing more frequencies for their convenience.

Nigerianflightdeck is an online news and magazine platform reporting business stories with a bias for aviation and travel. It is borne out of the intention to inform, educate as well as alter perceptions with balanced reportage.
Previous BAGAIA Commission Meeting: Discussions centre around new membership integration, regional safety
Next Nigeria plays vital role in global economy, Kitack Lim declares, commissions new NIMASA HQ