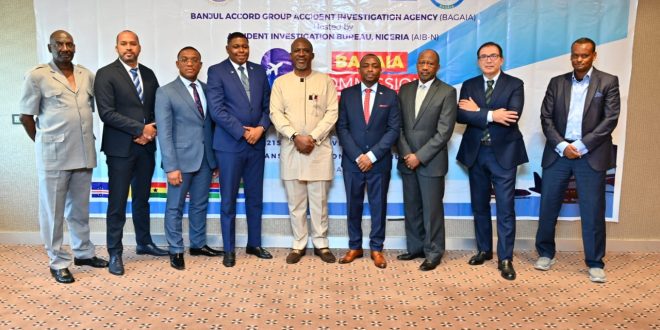 The Banjul Accord Group Accident Investigation Agency (BAGAIA) commissioner, Engr Charles Irikefe Erhueh has said that the regional agency still has the integration of more states in the region and beyond in the front burner.

Engineer Erhueh made this known at the 8th BAGAIA Commission Meeting which came to an end yesterday in Abuja with accident investigation commissioners from Nigeria and other Banjul Accord Group ( BAG) countries present.

The group has in the past two days reviewed recommendations/resolutions made from the second extraordinary meeting and other emergency meetings as well as presented the BAGAIA budget for the year 2023 and updated the BAGAIA agreement.

He said,”Having gone through two days of solid deliberations with inputs from various States and ideas on how to move forward, I am glad to say this 8th Commission meeting of the Banjul Accord Group Accident Investigation Agency (BAGAIA) has opened us to a lot of possibilities.”

“We would like to look at how some of our recommendations and resolutions would be implemented to the letter to improve our cause as an RAIO as that would be the benchmark our noble gathering is judged on.

“Despite all our teething challenges, we have been able to keep our accident rates as low as possible and in some BAGAIA states at zero. This is quite commendable and is a result of fora like these where we look at all the mechanics and share ideas, and intelligence to improve safety.

‘This responsibility of providing recommendations to ensure serious incidents and accidents is no
mean feat and cannot happen single-handedly, hence I call on all sister and brother states to
continue this camaraderie to ensure we continue to lift each other and become a region where our
input in the aviation chain makes a meaningful impact.”

The commissioner Accident Investigation Bureau, Nigeria ( AIB-N) Engr. Akin Olateru says all is set who spoke during the opening ceremony told the gathering of plans of the Bureau to extend its mandate to include rail and maritime safety.

Olateru said the AIB would become a multi-modal agency known as Nigerian Safety Investigation Bureau. He further said the goal of the NAIB and BAGAIA is to enable member countries capable of conducting independent investigation without recourse to Nigeria.

He said,”BAGAIA’s mission to assist member states in the conduct of Independent investigation of aircraft accidents and serious incidents in compliance with international standards cannot be overemphasized”.

” it’s potential role in providing Africa with dependable, trustworthy and efficient investigations can help in changing the perception and hence,the economy of our aviation industry”.

The EU-ASA expert Mr Mario Colavita who also spoke warned against complacency due to overconfidence arising from the recent improved safety records within the region’s States.

He cited the recent accident at Lima which he said should sound alarm bells adding that inspired by the reactive nature of the mandate’ of investigators, proactive measures by way of spreading information should be activated.

The meeting which held from 21 -22 November had in attendance, Commissioners of BAGAIA member states like Sierra Leone,Cape Verde, Gambia and Ghana with Mr.Liban Said Shire
Director of Aircraft Accident Investigation in Somalia as an observer.

Nigerianflightdeck is an online news and magazine platform reporting business stories with a bias for aviation and travel. It is borne out of the intention to inform, educate as well as alter perceptions with balanced reportage.
Previous Ibom Air set to deploy acquired A320s on increased frequencies
Next Gov Udom fixes January date for Ibom MRO to go operational, says facility will bring in forex