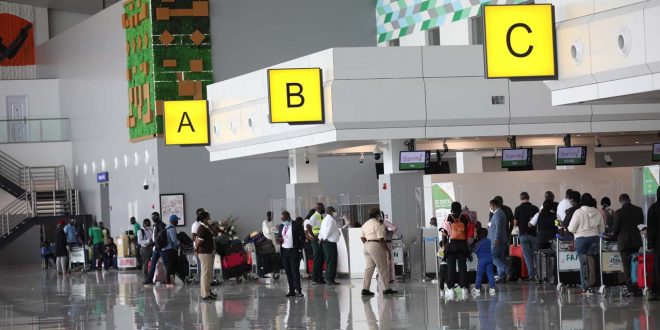 FEDERAL Airports Authority of Nigeria (FAAN) has given a timeline of two weeks for all airlines to be fully integrated on the RESA Airport Data System platform ending once and for all, the challenges associated with passenger facilitation that has bedeviled the airports since June when SITA unceremoniously withdrew services after an extension was sought.

Managing Director of FAAN, Captain Rabiu Hamisu Yadudu made this known after an inspection tour with the Director General of the Nigeria Civil Aviation Authority (NCAA) Captain Musa Nuhu to the Murtala Muhammed Airporton a fact finding and troubleshooting mission where he also appealed to passengers and said they would soon enjoy the best.

The FAAN boss who spoke on the new RESA platform said the team was already on ground and integration was ongoing with KLM/Air France fully integrated while airlines like British Airways and Delta were in the process of integration.

He said,” The DG NCAA wanted to see and inspect we decided to do a joint inspection. We went and saw and yesterday we saw that some airlines were already onboard like KLM/Air France. British Airways, Delta already have their cables,  the DG even asked specifically of Delta and he was shown, they  are not fully onboard but they have gone far to be fully integrated on the RESA platform.

The technicians came almost two weeks ago all the equipment are here and from all intent and indications within the next maybe 10 days and two weeks we will have everyone fully on board because the team is ready and the airlines  are ready.

He explained that the target from the outset for FAAN was to improve the system as it previously had a system that covered only two airports: Lagos and Abuja but with RESA the system covers five international airports, a national spread. READ MORE: SITA’s refusal to sign 6-month automation extension reason for service disruption at airports

On facilities and technology to be deployed in the five international airports, Yadudu said,”.. the previous system we had is CUTE, the Common User Terminal Equipment but we now went for the upgrade, new technology of the CUPPS: Common User Passengers Processing system, this was the new technology since 2009 and now 11 years later FAAN and Nigeria are using the CUPPS system and for five airports.

“Additionally, the self service Kiosk we never had CUSE, Common User Self Service, it comes with it now. The departure control system we never had is all now here, baggage reconciliation system is coming here; FIDS Flight Information Display System in Lagos but not in Abuja is now all over. so all the items spelt out in the contract are here, the improved package and improves \soft ware with a much wider coverage for all Nigerians so for us we are very proud of this.

According to him, the Common User self service Kiosks have been in Nigeria  100% since last year even before RESA came but implementation was delayed because of corona situation.

“We regret  the inconveniences that happened along the way, never intended but when you have a partner and one party decided to cause disruption when there is only one or two people in the world that can do it then naturally disruptions are inevitable but it’s not intended and the payment that we made to ensure that they don’t  disrupt are evidences.

“We made payment, US$500,000 so they can come, they said they will they acknowledged and said no we got approval from the minister to pay them again two weeks ago even though we know we have already started fixing the situation, we are an honourable organization, so by the time they say they are ready we already know we have migrated but we are not vindictive. READ MORE: FAAN moves forward from SITA impasse, takes delivery of RESA equipment

“The payment we are making is for extended service from October last year to June, their contract expired but they gave extra so month so we are paying for that extension period.

On the 18Left Runway light that has been an ongoing issue for almost a decade an half, Yadudu said a solution was in sight as agreements have been reached in principle and FAAN is waiting for approval so it can procure a new lighting system and install within 6 months.

He said the delay was due to the fact that there is an existing contract that has been protracted for years now and government cannot approve a new project when there is an existing one on the same facility. READ MORE: Runway 18L/36R: Grueling 13 year pain without Air field lighting at MMA

According to Yadudu, it was not negligence or lack of attention because as a government agency, FAAN had to follow due process.

He said that the AFL was an important project and more critical than even the Taxiway Bravo that FAAN has completed 95% but that for the existing contract, it would have been done first before Taxiway Bravo.

He said,” For the last two years since I became MD FAAN, our primary targets among them is the airfield lighting on runway 18L lighting and then taxiway Bravo and we thank God now taxiway bravo is 95% done, we just came from the inspection, it has been achieved. 18Left has been delayed because of a current contract that has been for many years and finally, the honorable minister has graciously accepted to resolve that issue that has been protracted and he has agreed to grant us permission or approval to quickly procure a new lighting system.

“You know FAAN is a government agency; we cannot work and procure a new project when there is an existing one on the same facility. So many things you see that are delayed, are not delayed because of negligence or lack of attention it’s because you have to follow due process.

“After two years taxiway bravo no issues, as so you can see it now. If not for the issue of an existing contract we would have finished lighting before bravo because it is more critical. Two years we couldn’t resolve the issues so we decided ‘let the ministry resolve it and approve for us to procure the light so we can fix it within 6 months. And within 6 months we install the lighting and the runway will operate 24 hours, it has all been agreed in principle, we are just waiting for implementation.

“We have in principle the understanding of the ministry and the minister so we are waiting for the documents to come. Its only when the documents come you can start processing the next stage of the business, we are rest assured now that in principle we have all agreed and understood

“It is however part of government regulations that you cannot procure the same thing twice until you resolve the first one. The ministry has resolved the first one and has taken over, freeing FAAN now with an approval to quickly resolve it because it is a critical requirement. So the key consideration for us here is that if not for the existing contract, we would have finished that before taxiway bravo.

“ If you compare, the lighting is more critical than taxiway bravo but now taxiway Bravo is 95% complete, we just came from there, you will not recognize it from the taxiway that was overridden with grass and a lot of shrubs, and this is brand new. So it’s a clear indication that AFL would have been done if not for the existing contract,” he said.

Nigerianflightdeck is an online news and magazine platform reporting business stories with a bias for aviation and travel. It is borne out of the intention to inform, educate as well as alter perceptions with balanced reportage.
Previous Electricity, duplication of govt. agencies functions impede on effective warehousing- Agboarumi
Next Port Harcourt Runway: NCAA says no reports on safety issues but will investigate concerns raised