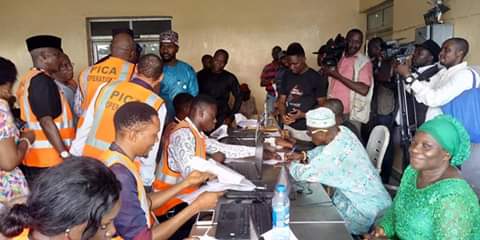 FEDERAL Government through the Ministry of Finance has announced the extension of the verification process for the payment of severance benefits of the Nigeria Airways Limited ex-staff in liquidation stating that payment for those verified would commence next week.

Government also said that verification will not end until all beneficiaries are captured.

A federal government delegation led by the Secretary of the Presidential Institute of Continuous Audit (PICA), Dr. MK. DIkwa mni made this known as they visited Kano and Enugu to monitor the verification process firsthand.

According to the Ministry of Finance, whose website has the information, assured that complaints would be addressed and cases should be filed officially with PICA.

For reported cases of omission, MOF said that PICA would make complaint desks available at the verification centres and one at the Ministry of Finance assuring that,”affected families be rest assured that all cases will be treated and paid, once verified.”

In the meantime, Federal Government is planning to initiate prosecution of persons indicted in the Justice Obiora Nwazota Judicial Commission of Inquiry White Paper.

Government it was learnt is looking into how to recover huge sums of money from individuals, organizations and agencies that mismanaged the defunct national airline.

Justice Obiora Nwazota , who served as chairman of the Judicial Commission of Inquiry submitted its white paper to government in 2002.

A source said government is constituting a team to initiate a probe into how the fortunes of the rested airline dwindled before it closed shops.

In particular, the President it was learnt intends to look at the white paper on the Report of the Judicial Commission of Inquiry for the investigation of the management of Nigeria Airways Limited between 1983 – 1999.

The white paper indicted some high-profile Individuals and organizations/ agencies from whom various sums running into billions of naira.

The panel was mandated to the financial position and financial management of Airways to examine all books of account and records to ascertain their compliance with appropriate regulations.

The panel was to investigate the application of funds, including budgetary allocations, special grants , loans for specific projects and proceeds from the sale of its product and services as well as verify , evaluate , ascertain the authentic level of indebtedness between 1983 and 1999.

Confirming the development, Chairman of Aviation Union Grand Alliance ( AUGA) and Chairman of Ex – Airways Workers , Comrade Lookman Animashaun said though the workers and pensioners are excited over the approval for payment of their severance benefits, they want Buhari to ask questions on how the airline was ruined.

He said the President should go beyond asking questions but insist on the implementation of the recommendations in the White Paper released by the Justice Obiora Nwazota Judicial Commission of Inquiry.

Animashaun said looking into the recommendations of the White Paper could not be more apt than now, when the Justice Nwazota is still alive to give credence to the contents of the document.

He said ex- Airways workers would want Buhari to push for the prosecution of politically exposed persons who were indicted in the White Paper , but straddle across the political landscape untouched.

Animashaun said :” Though we thank President Muhammadu Buhari for approving the release of our severance benefits, but we learnt the president has started asking questions on what led to the collapse of the the firmer national carrier .

” Beyond asking questions, Buhari must ensure government goes back to the white paper and institute a commission of inquiry , more so that Justice Obiora Nwazota is still alive.

” Every recommendation in the white paper should be implemented to the letter and the names of persons inducted in the report should be prosecuted .It is only when government does this that the wounds inflicted on the psyche of former workers of the rested national carrier would heal .”

Nigerianflightdeck is an online news and magazine platform reporting business stories with a bias for aviation and travel. It is borne out of the intention to inform, educate as well as alter perceptions with balanced reportage.
Previous Senate directs CBN to suspend ATM card maintenance charges
Next Air Peace inks multi-year aircraft spares deal with Embraer