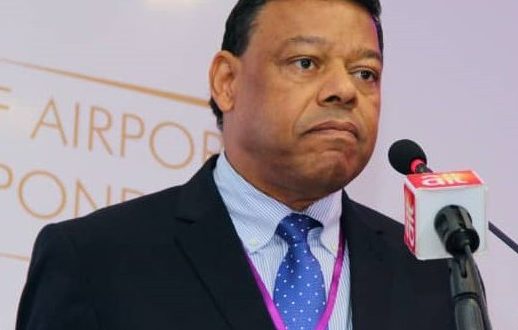 Fadugba raises questions on ‘Nigeria Air’; advises on how to create aviation hub

CHAIRMAN African Business Aviation Association (AfBAA), Mr. Nick Fadugba has said that there are many unanswered questions in terms of the management, funding and fleet as it concerns the newly unveiled national carrier launched at the Farnborough Airshow in London.

This is just as he advised on how the country can build an aviation hub especially with its size, market strength and advantage positioning.

Fadugba who was guest speaker at the 22nd Annual Seminar of the League of Airports and Aviation Correspondents (LAAC) held at the Sheraton Hotels and Suites objectively critiqued the soon to be established carrier Nigeria Air stating that as it stands government is already de facto owner of both Aero and Arik through the Asset Management Company of Nigeria (AMCON) and wondered how it would juggle them.

The AfBAA Chief Executive further mused that as it stands the National carrier might have to have a synergy with other carriers so they can better harness the huge market that foreign carriers due to their organization are taking advantage of.

He said,” There are many questions that need to be answered in terms of the management, the funding, the fleet. So, I believe the government now need to brief the Nigerian people on the national carrier. Rather than doing it abroad we need to come home and explain to the whole nation what the concept is.”

“More importantly, I am interested in how the national carrier interfaces with all the other airlines in Nigeria. Because remember that the government is the de facto owner of two other airlines: Arik and Aero. So, this is the first time I have seen one government own three airlines. Government needs to coordinate its airlines strategy in terms of moving forward.”

On how airlines no matter how weak they seemingly are, can harness the market, Fadugba’s recipe was quite simple: “Cooperation and partnership. Nigerian is blessed with the biggest domestic aviation market on the Africa continent, bigger than South Africa, Kenya, Ethiopian and many other countries. And yet we have not been able to harness this market for our own benefit.”

“The beneficiaries are foreign airlines; our airline need to work together. If you have 5 aircraft, 10 aircraft, it is nothing in the world of aviation. We need a critical mass. if you look Ethiopia, they have a 100 aircraft, that is one airline, and yet we have 10 airlines here with maybe 5 aircraft each. We need to work together otherwise the economics of the business are not in favour of the operators.”

“They need to come together to scale up to get a critical max. They can work together in training, maintenance, in spare pooling, aircraft acquisitions. There are many areas African airlines and Nigerian airlines in particular can work together. So, we need more cooperation in Nigeria among our airline brothers and sisters.”

Earlier during his presentation Fadugba had said that no country in the world would allow foreign airlines dominate 90% of its skies, especially when those airlines are leveraging on Nigerian passengers.

On how to establish a hub in the country, he stated that radical infrastructure upgrades and improved connectivity are key especially at the Murtala Muhammed International Airport which is natural due to Lagos’ economic activities.

“We have a choice in Nigeria between Abuja and Lagos but the economic hub is definitely Lagos because that is where the economic activity is, which generates air traffic. So, what we need to do is to completely radically improve the infrastructure at Murtala airport. It is a great airport but it is not coping with the current challenges of growth.”

“There are many things which are wrong with the airport right now in terms of infrastructure, if I had my way, I will build a completely new one but maybe we can’t afford it.  Therefore, when we talk about restructuring, we have spent a lot of money over the past 5 or 10 years on restructuring airports and I can’t really see meaningful, tangible benefits. There have been improvements but not in a meaningful way and if Nigeria is to move forward, if we are to build and effective hub, to improve connectivity, then we need to radically improve the infrastructure of our airports in Nigeria. “

Nigerianflightdeck is an online news and magazine platform reporting business stories with a bias for aviation and travel. It is borne out of the intention to inform, educate as well as alter perceptions with balanced reportage.
Previous National carrier: ‘Nigeria Air’ unveiled at Farnborough Airshow, targets 81 routes
Next PhotoReel: Sights from the 22nd LAAC Seminar 2018