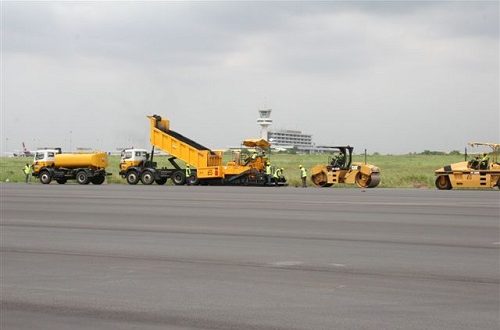 RESPITE may have just come the way of domestic airlines with the announcement that come next year, the Air Field Lighting (AFL) of 18L Murtala Muhammed Airports will come on stream by next year with standard lighting also stating that works on the Taxiway Bravo will commence first week of September.

Managing Director/CE, Capt. Rabiu Hamisu Yadudu who made this known last night in his opening remark at a stakeholders meeting stated that resuscitation of abandon Airfield Lighting (AFL) project is one that will come with standard

Yadudu said, “Resuscitation of abandon Airfield Lighting (AFL) project was on as that of Kano Airport is almost nearing completion, and that installation will start on the Lagos Domestic Runway very soon, we await NCAA approval to enable the contractor move to site.

“Primarily, the issue of 18L had a solar AFL but it was not accredited for our operations. We will put AFL. We already had the AFL in February or March but corona virus delayed.  In the first week of September work on taxiway Bravo will commence. While 18L will be installed early next year, a standard incandescent lighting for 18L

Recall, in 2008 the 2.7 km runway ’18 Left’ domestic wing of the Murtala Muhammed Airport, Ikeja, was rehabilitated for use however without any air field lighting leading to only daylight operations into the nation’s busiest airport and causing untold hardship on airlines for 12 years running as the situation compelled domestic aircraft at MMA to burn extra fuel to taxi down to their various terminals before disembarking their passengers at the Lagos airport.

The AFL briefly came up sometime in December 26, 2012 when it the apparatus was handed over to the Nigerian Airspace Management Agency (NAMA) which deployed 66 KALKIT brands of emergency airfield lights and additional two approach lights, that was also botched.

For the Taxi way Bravo, it will be recalled has been closed for 10 years but  in July 2,2020 while battling the Covid-19 pandemic, the Federal Executive Council (FEC) approved the sum of N2.2 billion, a revised estimated total cost for the extension and asphalt overlay of the Murtala Mohammed airport runway, which was re-scoped to reconstruct and rehabilitate it.

According to the Minister then, the extension and rehabilitation of the Taxiway were essential for the city of Lagos, as it will improve the safety of the airport.

“This central taxiway bravo is very critical to the operations of Lagos; it improves the efficiency and safety of that particular airport. It has been abandoned for the last 16 years or thereabout and in our own efforts to ensure that all projects are completed for the benefit of the country, it’s future and its fortune, in the wisdom of the Council chaired by the President, we approved that project and God willing that project will be delivered by this time next year,” he said.

The closure of Taxiway Bravo has made it impossible for aircraft to carry out normal engine runs at the compass Swing, reducing the capacity of the airport.

Nigerianflightdeck is an online news and magazine platform reporting business stories with a bias for aviation and travel. It is borne out of the intention to inform, educate as well as alter perceptions with balanced reportage.
Previous No land allocation at airports until master plan is complete-Sirika to investors
Next  Sirika relocates to Enugu ahead August 30 reopening of Akanu Ibiam International Airport