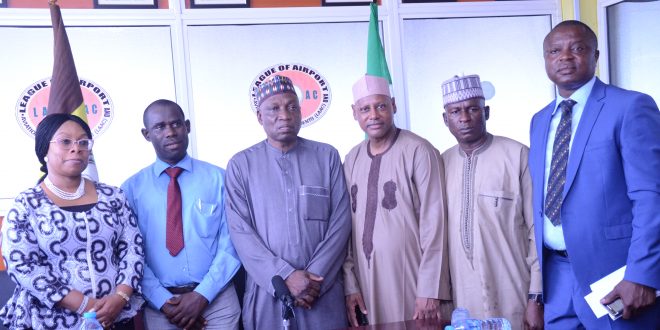 FOLLOWING the many infractions on the airside at the nation’s airports to cause mayhem managing director of the Federal Airports Authority of Nigeria (FAAN), Engineer Saleh Dunoma has said the airports authority is providing additional surveillance technology to secure critical areas of the airports especially the airside.

This is as the authority has said that it is in talks with the Enugu state government to get concerned organizations’ to remove erected communication masts that have the potential to impede safe landing at the airport and relocate the market incursion at the airside.

Dunoma who was guest of the League of Airports and Aviation Correspondents(LAAC) Gateway Forum, at the Murtala Muhammed Airport, Lagos yesterday said although airport is a public place that plays host to so many people, FAAN would provide closed-circuit television cameras at all its facilities, beginning from the international airports.

According to him, the airports already have Close Circuit Television (CCTV) technology but that the authority is adding extra ones because airports operations are dynamic and the changes come usually with challenges which FAAN has to adapt to in order to surmount them.

Dunoma said,”Some areas in the airports are restricted; there is access control at the airports, we must have proper access control system. Security challenges come in various forms; when you address one, some others show up. We have mounted CCTV cameras at the Lagos and Abuja airports. It is 80 per cent and 70 per cent completed at the Lagos and Abuja airports respectively.

“We’ll also install a mobile technology that can see up to seven kilometers. If you try to penetrate unlawful, the surveillance system will detect it. By the time all the technologies are put in place security will be water-tight,” he said.

According to Dunoma, security and safety of passengers is the top priority for FAAN and so it plans to provide sophisticated scanning machines that can help the authority detect not only metal objects but also drugs.

“We are planning to bring in sophisticated technology. The machine can detect anything. If you are a student of physics, this particular scanner can break any element down to the atom, in fact it can provide the atomic component and so it is quite sophisticated and advanced. it is currently being tested and awaiting certification for airport usage. We do not have it here but what we have if properly used is quite effective. We have the scanner and the hand-held detectors and when used it can detect things and make the user delve further.”

On the impediments to landing at the Enugu Airport, the FAAN boss said they are television and Radio masts and a local market that has encroached on the airport land.
Dunoma said Enugu state government had given approval for the immediate dismantling of the two obstructing masts on runway 08 and the relocation of a community market at the other end of the runway to ensure security.
According to the FAAN boss, the governor of Enugu state last week during the visit of the aviation Minister to the governor ordered the dismantling of the two masts and relocation of the community market to give way for proper expansion and to ensure security of the airport.
Dunoma explained that restiveness from communities around the airport has warded off contractors installing the lighting facilities at the airport adding that all the lighting facilities were on ground but could not be installed as a result of hostilities from the communities around the airport.
Recall that concerned authorities in the aviation sector had on several occasions called for action in the dismantling of the two obstructing masts on the runway 08 of the Akanu Ibiam international airport Enugu as it posed a threat to safety.

Nigerianflightdeck is an online news and magazine platform reporting business stories with a bias for aviation and travel. It is borne out of the intention to inform, educate as well as alter perceptions with balanced reportage.
Previous Involve entrepreneurs, policy experts before signing AfCFTA; AON tells FG
Next NCAA reacts, says there is no discrepancy in figures it churns out