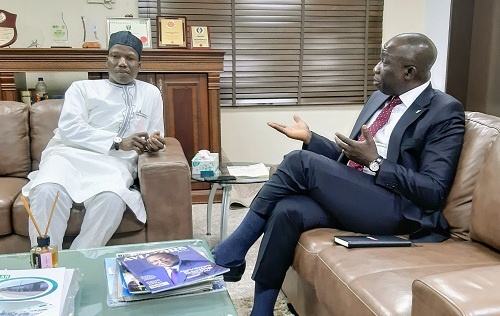 AS part of plans to address copyright infringement materials in and around the nation’s local and international airports, Federal Airports Authority of Nigeria (FAAN) and Nigerian Copyright Commission (NCC) have committed to the development and implementation of a national anti-piracy strategy.

This strategy will address the sale of pirated books, films, music and other copyright infringing materials, as both agencies agreed to work out the modalities for sustained proactive enforcement to ensure that the interest of right owners are adequately protected in line with the Federal Government policy of guaranteeing adequate return on investment and growing the creative sector.

Captain Yadudu gave firm assurance that FAAN would partner with NCC to ensure that its premises do not become a safe haven for copyright criminals. He reiterated the commitment of FAAN to support NCC in its renewed fight against piracy in Nigeria.

Yadudu said, “We are committed as Government agencies to protect public interest even in copyright matters and we owe a duty to assist each other in executing our mandates. The legal and commercial teams of FAAN will be deployed to assist NCC to strengthen its enforcement actions at airports across the country”

While decrying the pervasive piracy in all copyright sectors, the FAAN MD urged right owners and other stakeholders in the industry to address the challenges in the distribution networks so as to make genuine copyright works more readily available in the market.

Earlier, the NCC DG, Mr. Asein had expressed concern at the high volume of pirated materials at the nation’s airport and the negative impact of this, not only on the fortunes of right owners but also on the nation’s image.

He stressed that the criminal activities of a small percentage of Nigerians were capable of distorting the country’s image as a land of talented, industrious and law-abiding people.

Mr. Asein noted with regret that the activities of pirates have adversely affected the educational sector and threatened the book industry.

According to the Director General, some of the authors whose books were highly pirated included those of Nobel laureate, Prof. Wole Soyinka; former Presidents like Chief Olusegun Obasanjo and Dr. Goodluck Jonathan as well as renowned authors like Olusegun Adeniyi.

Explaining the commitment of NCC to ridding Nigeria of reckless distribution of pirated materials, he remarked that his agency in collaboration with relevant sister agencies, would intensify efforts at different production, distribution and sales points; at border posts; air and sea ports; hotels, malls and other public places; and on the streets, as part of a comprehensive action plan against all forms of piracy and copyright abuses.

He added, “The Commission needs FAAN as well as other regulatory and enforcement agencies as key partners in its renewed drive to curb wanton copyright infringement in Nigeria. We are committed to full implementation of our mandate for sustainable growth of the creative industry. With your support, copyright piracy will not thrive under our watch”.

Nigerianflightdeck is an online news and magazine platform reporting business stories with a bias for aviation and travel. It is borne out of the intention to inform, educate as well as alter perceptions with balanced reportage.
Previous AzmanAir acquires A340-600, NAMA commences navaid calibration, FAAN
Next NCS appoints NOVA Merchant Bank as duty collecting bank