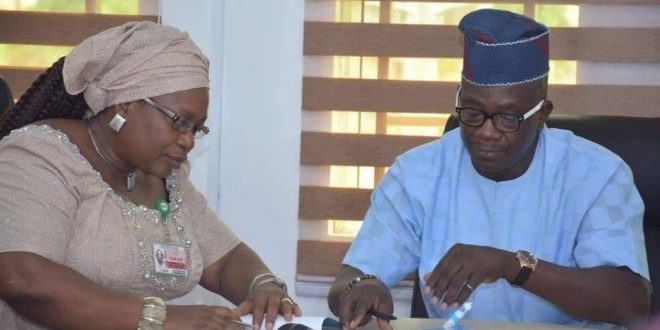 MANAGEMENT of the Federal Airports Authority of Nigeria (FAAN) and the Lagos State Emergency Management Agency LASEMA have signed a Memorandum of Understanding (MOU) to have access to difficult terrains and five nautical miles from the airport in case of emergency.

Airport manager Murtala Muhammed Airport Ikeja MMIA, Mrs Victoria Shin-Aba who signed the agreement on behalf of FAAN said history has been made in partnering LASEMA for a better understanding in ensuring that lives were saved in times of emergency.

Shin-Aba noted that the journey which started a year ago after going through a tough process finally yielded positive result in collaboration.

She assured the LASEMA team of the Federal Airports Authority of Nigeria’s support to accord LASEMA vehicles free access at the toll gate as part of its contribution to save lives.

Mrs Shin-Aba noted that 80 percent of the airport community reside in Mafoluku area of Lagos state adding that with the MOU, there will be easy coordination of activities during emergency that will further strengthen their relationship.

She commended LASEMA team for their assistance to the MMIA during its fire mock exercises saying that the agency was known for real-time response to emergency.

The airport manager charged LASEMA not to see their union as the end but a challenge towards a new beginning for better understanding adding that both FAAN and LASEMA were out to save lives.

Earlier in his address, the general manager of LASEMA, Mr.  Tiamiyu Adesina explained that the agreement was to cement the relationship between the two agencies in saving lives.

Adesina assured MMA team of the support of LASEMA in serving humanity through their contributions in times of emergency at the airport.

He had earlier appealed to MMA team to grant them access through the access gate at the airport as the only close alternative route to other parts of the state.

Adesina noted that all over the world that collaboration has remained the only way to achieve goals adding that their alliance will keep their dream alive.

Nigerianflightdeck is an online news and magazine platform reporting business stories with a bias for aviation and travel. It is borne out of the intention to inform, educate as well as alter perceptions with balanced reportage.
Previous Passengers obligations and things to know about air travel
Next 1.2million travelers pass through MMIA in 1st half 2017- Immigration