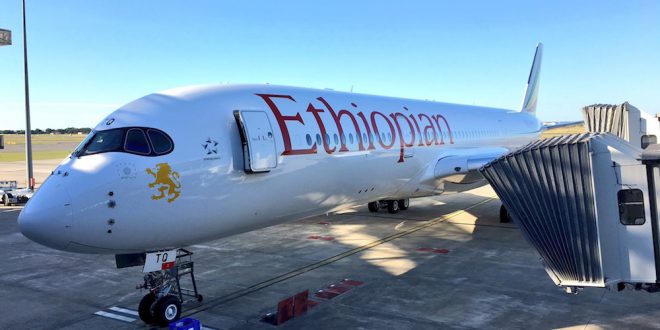 ETHIOPIAN AIRLINES has announced that its second B-787-9 aircraft named after the Chinese capital city Beijing, has made its maiden commercial flight to Beijing. Ethiopian Boeing 787-9 at Beijing Capital International Airport On-board the new Ethiopian game changing fleet, passengers have enjoyed its unique features such biggest windows in the sky, high ceiling, less noise, distinctive lighting, and higher air humidity at 40 000 feet.

Ethiopian is among the veteran carriers that started serving the People’s Republic of China back in the early 1970’s, which has translated into a flourishing commercial and bilateral cooperation between the continent of Africa and China.

Currently Ethiopian operates 30 weekly scheduled flights through its five gateways in China: Beijing, Shanghai, Guangzhou, Hong Kong and Chengdu. Ethiopian is supporting China’s Belt and Road Initiative with its extensive and convenient network of passenger and cargo connectivity in Africa, Middle East, Asia and Europe. Beijing is a city with profound history and tourist sites such as the Great Wall, the Palace Museum and the Temple of Heaven. Apart from these famous historical sites, Beijing is also a political and cultural centre of China.

Nigerianflightdeck is an online news and magazine platform reporting business stories with a bias for aviation and travel. It is borne out of the intention to inform, educate as well as alter perceptions with balanced reportage.
Previous AIB issues 12 safety recommendations of four crash reports
Next Yakubu, NAHCO CEO, promises positive change