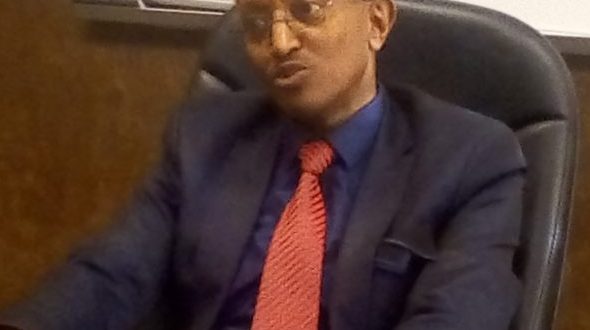 MANAGING Director of Ethiopian Airlines International Operations, Esayas WoldeMariam Hailu  has declared that having a Maintenance a repair and Overhaul (MRO) facility is important for the survival of any airline; especially if it wants to survive the grueling cost of high maintenance charges.
This is just as he says Ethiopian Airlines has increased its cargo facility from its present 300,000 tones to over 800,000 tonnes annually as part of its strategic growth plan for 2025 and is set to put the facility to work in the coming weeks.
Esayas who made these known after a tour of the airline’s facilities stated that without an MRO, aviation is incomplete because of the huge cost the airline can save if it has capacity to carry out such capital-intensive cost project itself.
Ethiopian Airlines which has one of the best MRO facilities in Africa and the Middle East  currently carries out maintenance for Airbus 350XWB, Boeing 787/777/767/757/737, Bombardier DHC-8 from Q100-400 and currently has seven total care partners.
Speaking earlier MRO Sales Manager, Mekdelavit Abebe who gave the capacity of Ethiopian Airline’s MRO said the airline group had four well-equipped state-of-the-art hangars and is currently carrying out third-party maintenance for others as well as its fleet.
“Our MRO takes care of all the maintenance for the aircraft currently we do Kenya Airways jumbo jet, we have Malawi, ASKY,the Presidential fleet of the Equatorial Guinea, Congo Airways, Rwanda and in Nigeria we perform line maintenance for Arik Air.”
“Normally, we have over 90 aircraft and all of them have at least an A-Check at least once every year just for Ethiopia and we have seven total care customers for Rwanda they have six 737s currently and two Q400s just for Rwanda, we have one 737and Q400 at Malawi; we have four 737 and now they are going to acquire a fifth at ASKY and imagine adding that for seven total Care customers for Q400 every A-Check will come every 600 hours, for 737 it’s all same 600hours so you can imagine how many checks they will experience not to mention C-Checks for that it is the heavy check but it doesn’t happen all that frequently but the A-Check does.”
On its capacity increase drive on both cargo and catering, the airline said it was increasing cargo to become a central import and export hub in Africa and positioning itself to be part of the total aviation process by providing catering for its flights and others.
The airline stated that it is also increasing capacity of its catering services by increasing daily catering production from 35,000/40,000 per day to over a 100,000.
Esayas said that its rapid but strategic expansion plan is part of implementation of the airlines vision 2025.
According to him, increasing the airlines cargo facilities will aid Ethiopian Airline to help redistribute wealth all over Africa through import and balance that out with exports.
He stated that Africa has a lot to export to the rest of the world:” Africa can send fresh fruits from Nigeria for example  if there is a guaranteed supply, we are ready to carry it and keep it in our cold facility. By the way of imports, Africa imports a lot of technology. We want to distribute from here to the rest of Africa and  take from Africa to the rest of the world. That way, Africa will not only be importing but exporting. We are trying to attract a lot of Foreign Direct Investments (FDI) and we can accomplish that through exports as Ethiopia is a regional logistic hub for Africa. Africa will not only be an importer but an exporter and for this we needed to have a modern cargo facility to handle at least 800,000 tones of cargo annually.”

Nigerianflightdeck is an online news and magazine platform reporting business stories with a bias for aviation and travel. It is borne out of the intention to inform, educate as well as alter perceptions with balanced reportage.
Previous Air Peace adjusts Enugu flights times, regrets suspension of Dec15 West coast expansion
Next FAAN assures passengers on safety and comfort during Yuletide