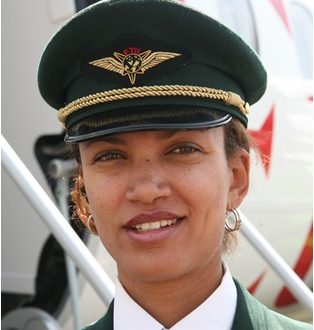 ETHIOPIAN Airlines has announced its first all Women flight to Nigeria a unique flight solely operated by women where they are expected to fill every role on the flight; from the pilots and cabin crew to in flight ramp operations as well as flight dispatchers on ground, the company revealed.

This will also be the first time ET will be operating an all women flight in Africa.

The flight expected to leave for Lagos, Nigeria from Addis Ababa on the 16th of December, will have on board some selected Nigerian journalists. The pilot, Captain Amsale Gualu had earlier said in another all Women operated flight to Bangkok : “This flight shows us that if women get equal opportunities and work hard I’m sure they can achieve whatever they want in all fields including the aviation industry.”

The all female crew which also has Tigist Kibret as First Officer, will be flying the Boeing 777. In a country where few women have dared to enter the highly male-dominated profession of piloting, Captain Amsale Guale, in 2010 become the first Ethiopian female captain by flying an Ethiopian Airlines Bombardier from Addis Ababa to Gondar.

Ethiopian Airlines says it wants to promote women’s empowerment and encourage more African women to pursue aviation careers. Although one-third of its employees are women, the figure is smaller when it comes to positions such as pilots and technicians, says Ethiopian Airlines.

Ethiopian Airlines the first Skytrax 4 star Airline in Africa is the largest and the fastest growing Airline in Africa. In its seven decades of operation, Ethiopian has become one of the continent’s leading carriers, unrivalled in efficiency and operational success. Ethiopian commands the lion’s share of the pan-African passenger and cargo network operating the youngest and most modern fleet to more than 90 international destinations across five continents. Ethiopian fleet includes ultra-modern and environmentally friendly aircraft such as Airbus A350, Boeing 787, Boeing 777-300ER, Boeing 777-200LR, Boeing 777-200 Freighter, Bombardier Q-400 double cabin with an average fleet age of five years. In fact, Ethiopian is the first airline in Africa to own and operate these aircraft. Ethiopian is currently implementing a 15-year strategic plan called Vision 2025 that will see it become the leading aviation group in Africa with seven business centers: Ethiopian Domestic and Regional Airline; Ethiopian International Passenger Airline; Ethiopian Cargo; Ethiopian MRO; Ethiopian Aviation Academy; Ethiopian In-flight Catering Services; and Ethiopian Ground Service. Ethiopian is a multi-award winning airline registering an average growth of 25% in the past seven years.

Nigerianflightdeck is an online news and magazine platform reporting business stories with a bias for aviation and travel. It is borne out of the intention to inform, educate as well as alter perceptions with balanced reportage.
Previous AfBAA celebrates first AfBAC EXPO as founding Chairman announces transition plan
Next Arik increases capacity; resumes Abuja-Calabar, Abuja-Uyo