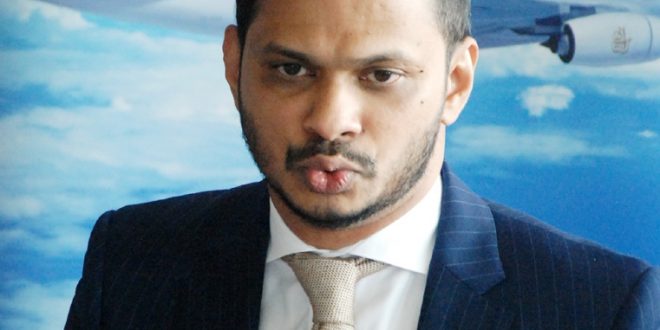 EMIRATES Airline, one of the world’s most steady airlines as regards profits has relaunched its Oriental route of Guangzhou in China with plans to show its passengers and potential passengers both tourists and business, the travel experience of a lifetime.

In a chat recently, the airline’s new Regional Manager West Africa Commercial Operations, Afzal Parambil hinted the flying public on the airline’s relaunch of the route and what makes travelling the airline to the far east, the experience worth having especially as it systematically creates a bridge for both Nigerians and Chinese to do business, share culture and learn from each other.

Parambil highlighted a number of reasons why the airline was on top of its game in all its destinations and how it has integrated no fewer than 172 nationals with crews from over 130 nationalities to give passengers the feeling of ownership of the airline in addition to its increased baggage space for Nigerians who statistics show do a lot of shopping when travelling.

Also talking about why the airline chose Guangzhou of all the routes in China stated that the Guangzhou was not Emirates choice but the market choice since research has shown the existing traffic between Nigeria and that particular route due to budding commercial activities stemming from manufacturing between both countries.

He also talked about how the operations will expose both countries’ rich culture to each other and how Emirates will help push tourism in Nigeria to Chinese passengers and vice versa stating that the airline doesn’t just fly the routes but helps develop capacity in certain other areas.

According to Parambil, the airline discovered that commercial activity there was quite high as most manufacturers are based there plus with a budding partnership between Nigerian and Chinese entrepreneurs.

On what kind of businesses Nigerians were transacting with the Chinese, Parambil explained,” Multiple Businesses. In the past, Nigerians used to trade in China sourcing goods for sale but that has changed considerably as Nigerians now go into partnership to produce things with the Chinese local partners so now they just don’t buy, they produce together.”

On the viability of Guangzhou:

“Flight Operations doesn’t just look at viability from one market to the destination, it looks at both ways and to have a sustainable business model, you must have traffic from Nigeria to China and from China to Nigeria. As an airline, we don’t just carry passengers from Lagos to Beijing, we bring people from Beijing to Lagos too in form of manufacturers, in form of investors, we provide the role bringing tourism into Nigeria but you don’t see it now because tourism here is developing.”

Parambil explained that Emirates products on board its flights especially to Guangzhou from meals to other services are what makes all the difference as it has over 2,400 channels, exquisite cuisine and an amazing crew to boot.

“We offer over 2,400 Channels on board our aircraft to all our destinations and that includes movies, live news channels, sports and for kids we have enough entertainment to keep them busy so when you travel with the family you don’t need to worry about your kids. In fact, for the kids on the flight you will have to pull them out when they are playing a game or watching a cartoon.”

“When you fly from here (Nigeria), we make sure that the senior crew member is Nigerian, that way when there is an issue, he or she is there to support and assist.”

The airline regional Manager also said Emirates had to tweak its baggage policy a whole lot to increase its attractiveness to passengers especially Nigerians who fly with a lot of baggage, according to him, the airline increased the baggage space to accommodate such travelers.

Parambil said,” Our baggage policy is also very attractive. We offer two pieces of luggage now. In the past, we used to give 30kg for Economy Class, 40kg for Business Class and 50kg for First Class. So, we relaunched it having looked at the requirement of the market. We relaunched it by two pieces so economy passengers can carry two pieces of baggage 23kg each making 46kg for them; while Business Class also has two pieces of 32kg each making it 64kg and this has helped travelers to Guangzhou because they don’t travel and come back empty-handed.”

Nigerianflightdeck is an online news and magazine platform reporting business stories with a bias for aviation and travel. It is borne out of the intention to inform, educate as well as alter perceptions with balanced reportage.
Previous What passengers need to know about airlines’ obligations to them
Next NAMA boss underscores import of human factor in ATM safety