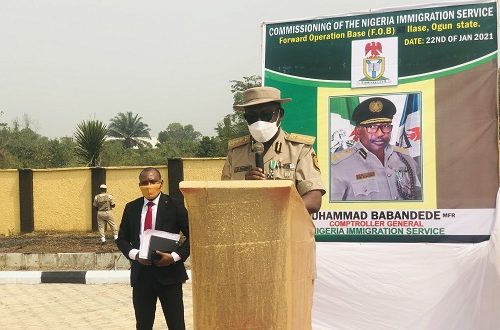 COMPTROLLER General of the Nigerian Immigration Service (NIS), Muhammad Babandede has said that the service will soon in the year start operating the e-border  which will ensure real time, online monitoring and communication at the nation’s border.

Babandede maid this known at the weekend in Ilase,  Ogun State during the official inauguration of another  Forward Operational Base (FOB) where he also revealed that the NIS Technological Building  where access and share of information among security agencies will also commence operations from next month.

The NIS boss commended the President Muhammadu Buhari –led administration for the investment made in the service since their taking over office stating that it has done so much to improve the operations of the service in land, air and sea border mobility.

The Immigration Comptroller General said, ”Mr. President has above all approved e-border, which will start this year. It means that we will start seeing what is happening on our land borders real time, online and we can communicate and share this with other law enforcement real time online.

“Mr. President approved in council, the building and furnishing of the technological building, which we hope he would commission next month, this technology building will get real time information about travelling whether it is visa, whether it is boarding an aircraft, whether it is crossing border and we will share with other law enforcement, real time online. There is no government that has invested in land security, air border, sea border as far as mobility of human beings is concerned like the administration of President Muhammadu Buhari.”

The Immigration boss while speaking on security also cautioned servicemen especially those at the border posts to respect the rights of the ordinary person stressing that it is only through mutual respect and inclusiveness that they can get information from the community where they work.

Babandede cautione the service men on some of the popular vices that they may fall temptation to and urged them, for the greater good, to shun those vices and embrace good relationship with the community to get results.

Nigerianflightdeck is an online news and magazine platform reporting business stories with a bias for aviation and travel. It is borne out of the intention to inform, educate as well as alter perceptions with balanced reportage.
Previous Nigerian Immigration commissions second FOB in Ogun; warns men against illegal migration levies
Next NAAPE seeks harmonious existence with airline owners at one day symposium