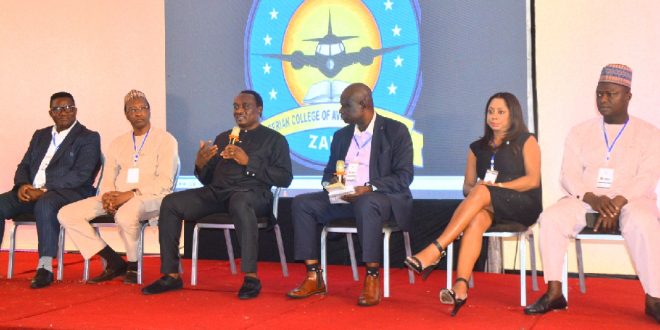 TWO industry professionals, President, Aircraft Owners and Pilot’s Association of Nigeria (IAOPA), Dr. Alex Nwuba and the Managing Partner of Avaero Capital, Sindy Foster have both charted a path for the Jet fuel crisis the Nigerian aviation industry is currently grappling with, as well as other issues in the industry.

Both eggheads also had strong opinions with regards the planned emergence of Nigeria Air, the national carrier being established by the Federal Government of Nigeria and made their views known at the just concluded 26th League of Airports and Aviation Correspondents ( LAAC) Annual Conference.

Jet A1 also known as Aviation fuel currently sells at almost 800/litre in some states while the airlines are equally finding it difficult to get the product and maybe one major reason why airlines are suspending operations or being suspended as they can hardly grapple with the reality of buying at so much, a component that accounts over 40% of their operating cost.

Dr. Nwuba who punctured the idea routes by airlines that they wanted to import their own fuel, said they could not do it better than the marketers but asked for discussions around the how to get it done better.

“But there are other mechanisms available to the government itself to find fuel at cheaper sources that can be brought into the market to ameliorate the problem.

“I think as an industry, if we re-engage the marketers, the cooperation can come, you can provide solutions for them that make the product cheaper.

“…There is something in aviation called tankering, there are some economics in the world where fuel is one third the cost of what it is in Nigeria. So in those markets, the airlines from there would have fuel to come and fuel to go back.

She said,”Now the issue with aviation fuel. Why are we not refining aviation fuel in Nigeria? We have known oil prices have been rising and rising. What has been done to localize the domestic market for refined petroleum products in Nigeria?

“We have refineries which are moribund, they keep talking about fixing, fixing what when manufacturers of the equipment have told us it’s obsolete.

That will solve a lot of the issues that we have inherited inflationary cost and prices.

On Nigeria Air, Dr. Nwuba said if the new airline is coming into a market with a myriad of challenges that are connected to foreign exchange and for a country trying to create local employment and stem capital flight, he questioned the rationale behind some of the decisions including wet-lease of aircraft.

“…let’s ask some fundamental questions. The market exists. Airlines are operating in this market, they have challenge with the price of fuel, they have challenge of foreign exchange to pay suppliers. You even have the challenge of airlines that are selling tickets, hundreds of millions of dollars that cannot repatriate those funds. How will these three planes operate on the basis of wet lease.

“What’s a wet lease? Wet lease is an arrangement where the government has engaged an airline outside the country to bring airplanes and crew. So how does that solve our problem as a nation in terms of creating employment as an industry? How does that solve the problem of foreign exchange that we are already facing because we had to pay for that wet lease in foreign exchange.”

He continued,”How does that solve the problem of availability of funds through the Central Bank or will the national carrier get its money through the black market to fund its operation. It is absurd, it’s essentially an absurd proposal made to a group of people that have no knowledge of what’s going on and they are acting like I said judges receiving information on which they judge without basic facts.”

Foster on her part was miffed about the airline’s ownership stating that the 95% owners need to be known before any aircraft wet leased or otherwise takes off.

She said, “The challenge we have in this environment is that people don’t read. They don’t access the information that is available and then they claim that things are shrouded in secrecy. It encourages people to operate in a more secret and less transparent manner because they know that people are not going to read what they are going to put out there.

“So the formula of ownership has always been out there: 5% for the Federal Government, 49% for the strategic foreign partners, 46% for Nigerians. So it was always out there. The issue we have at the moment is we don’t know who are the 95% right now.

“For an airline to be launching and we don’t know who is the majority owners of this airline is an issue, and that should be clarified before any aircraft takes flight anywhere.”

Nigerianflightdeck is an online news and magazine platform reporting business stories with a bias for aviation and travel. It is borne out of the intention to inform, educate as well as alter perceptions with balanced reportage.
Previous NAMA says all but two aerodromes have approach, landing aids
Next NIS redeploys sixty-nine senior officers immediately