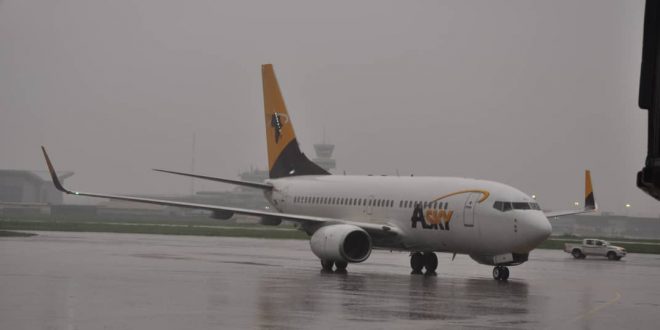 The ASKY/Dana lease aircraft landing at the Murtala Muhammed Airport

DANA AIR has said that its aircraft lease partnership with ASKY is one that has a potential to transcend into something deeper, like codeshares but in no way is it planning to give the Togolese carrier, or any other the opportunity to do fifth freedom.

The airline made this known today as its wet-leased early bird aircraft, a Boeing 737-7000 touched down in Lagos from Abuja around 5:20pm with over a hundred passengers.

While responding to questions from reporters, Chief Operating Officer of Dana, Mr. Obi Mbanuzor further clarified that Dana Air has a lease and interline agreement with ASKY and has not inked any deal whatsoever with Ethiopian Airline, ASKY’s parent airline.

This deal with ASKY gives Dana Air the opportunity to fly early flights to Abuja on an ASKY aircraft with Dana call sign, Dana in-flight services and catering.

The agreement also avails Dana the opportunity to have an aircraft on the 7am schedule and the deal further acts as a buffer for the airline as two of its McDonnell Douglas (MD83) are currently undergoing C-Check in France with one scheduled back at the end of the month.

Mbanuzor said,”when we announced in February that we are entering partnership with ASKY it involves so many things and the partnership people are already seeing the fruition. The initial partnership has various levels and what you are seeing now is the aircraft leasing aspect of the partnership, where ASKY will provide us with aircraft.”

” You know we have had some operational constraints, currently we have two of our aircraft in France undergoing C-Check, hopefully one will be back before the month end. Part of it is creating aircraft capacity. We are also preparing for fleet augmentation which is also successfully on track.

“For this partnership, ASKY is partnering with three(3) Boeing 737-700 aircraft there will initially be three flying at different times, it’s a complex wet lease operation and so they will provide and aircraft and they might take it and put another in the system. There is also a 737-800 as well all being used interchangeably. As time goes on, this partnership will help our staff get acquainted and trained with the 737-700 aircraft type. Without going deep, it is part of what we are looking at in furtherance of this partnership,” Mbanuzor said.

ASKY right now this has to do with the aircraft but we did mention in February that we have entered an interline agreement , we will go further to entrench it with the codeshare. So we are discussing many of those agreements even with other airlines. So this is the first part of that agreement we mentioned in February.

On the Ethiopian Airline connection Mbanuzor said, ” I can tell you we’ve had no discussion with Ethiopian, we had zero discussions with them. Even in terms of the aircraft, this is strictly between Dana Air and ASKY. For now, it’s an aircraft lease agreement and what we are getting in return, we are getting the aircraft, and we are giving the standard economic remuneration for that. I repeat, this has nothing to do with Ethiopian Airlines and if there is anything ASKY is doing with Ethiopian it is on their own level. The interline and codeshare once we sign it is also between us ASKY.

Nigerianflightdeck is an online news and magazine platform reporting business stories with a bias for aviation and travel. It is borne out of the intention to inform, educate as well as alter perceptions with balanced reportage.
Previous Aero to increase frequency on PH, Kano, other routes
Next NAMA despairs over lack of spares to maintain TRACON, insinuates manufacturers sabotage