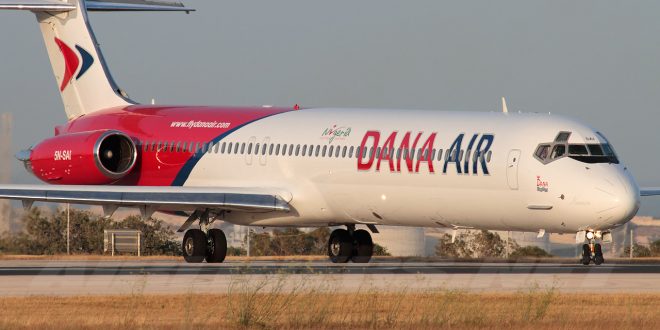 DANA Air aircraft numbered 9J0363, flying from Abuja to Port Harcourt airport yesterday overshot the Port Harcourt runway during a heavy rain which was accompanied by strong wind and storm in Port Harcourt.

The incident recorded no casualty as all passengers on board were safely evacuated.

According to a stamens by the airline, “On Tuesday , 20 February 2018, one our aircraft (9j0363) operating the ​Abuja​ – Ph flight ​skidded off​ the runway ​at​ the Port Harcourt International Airport, as a result of the ​bad weather situation ​and torrential rain at the time of landing.”

“No casualty was recorded and all passengers and crew disembarked safely. ”

The airline commended both cockpit and cabin crew on how the situation was handled.

“We commend the Pilot-in -command who was able to control the aircraft to a complete stop, before passengers and crew disembarked. We also wish to applaud the Captain for exhibiting the highest safety standards and handling the situation professionally. “

Nigerianflightdeck is an online news and magazine platform reporting business stories with a bias for aviation and travel. It is borne out of the intention to inform, educate as well as alter perceptions with balanced reportage.
Previous Onyema, Air Peace boss says Africa needs seamless connectivity to unlock economies
Next Air France passenger cry out over loss of baggage, shabby and insensitive treatment