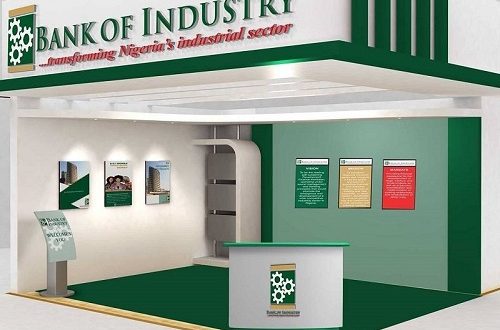 NIGERIA’S Bank of Industry (BoI) has begun the disbursement of N15,000 TraderMoni loans to beneficiaries who have successfully paid back their first N10,000 loans.

According to the bank, the disbursement was in response to the increasing beneficiary repayments recorded under the scheme.

Through a flexible weekly loan repayment plan of N430 paid over six months, the bank said it recorded high repayment of loans.

BoI explained that the beneficiaries paid back by paying their BOI-GEEP loan on the PayDirect available at commercial bank branches across Nigeria and also through the purchase of repayment scratch cards that could be procured from TraderMoni agents deployed across any one of 2,260 markets/cluster locations.

Mrs. Aishetu Adamu, a condiment and medicine seller at Bolori market in Maiduguri, Borno State, the bank said was one of the beneficiaries of the initial loan of N10,000 that migrated to the next phase.

Another N15,000 beneficiary was a small stall owner who sells provisions – Mrs. Lucky Solomon.
Mrs Solomon revealed she was happy with the improved profits she made from the first N10,000 loan she received, stressing that with that, she was able to repay the loan without delay and go for the next loan.

The bank noted that Mrs. Aishetu, and Mrs. Solomon were among the many beneficiaries in Lagos, Osun, Kano and Borno who had paid back their first, and gotten their second level loan amounts.

“Beyond providing loans for MSMEs, GEEP is focused on sustainably boosting the MSME sector in an organised and effective manner by requiring that beneficiaries seeking higher loan amounts provide a bank account (and BVN),” BOI said.

Nigerianflightdeck is an online news and magazine platform reporting business stories with a bias for aviation and travel. It is borne out of the intention to inform, educate as well as alter perceptions with balanced reportage.
Previous Electricity 2025: AfDB begins cooperative feasibility studies in Nigeria, Ethiopia
Next Connectivity: SAA inks commercial partnership with Africa World Airlines