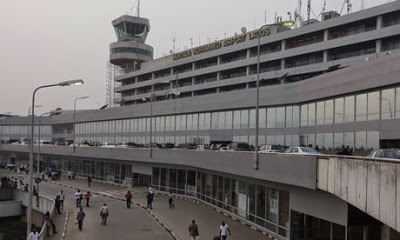 THE Murtala Muhammed International Airport, Lagos was thrown into darkness and confusion yesterday night with the effects of the black out paralyzing activities at the nation’s busiest airport last night.

Many travelers departing the airport went through stress as the power outage affected the entire gamut of air travel causing passengers to disembark aircraft with a ramp among other anomalies.

In response to the unfortunate incident at the airport, General Manager Public Affairs Federal Airports Authority of Nigeria (FAAN) Yakubu Dati explained,”There was a power outage from the Power Company  and the airport was on our independent power supply.”

“However, when power was restored, the surge adversely affected the K16 Transformer that serves the Air-bridges and rendered them unserviceable. This adversely affected operations of departing flights. The heavy rainfall further delayed attempts by engineers to effect repairs immediately.”

Reports reaching Nigerianflightdeck.com last night indicated that the departure lounge of the MMIA was in darkness and airlines officials deployed gas-powered lanterns and battery-powered flashlights to check-in passengers and walk them through the boarding gates.

Passengers who were scheduled to board  also  had to scrabbled their ways through the pitch black lounge to the boarding gates into the aircraft.

The FAAN spokesman however apologized stating,” FAAN wishes to apologize to passengers, airlines and the general public for the inconvenience caused by this development as efforts are being made to find a lasting solution.”

Nigerianflightdeck is an online news and magazine platform reporting business stories with a bias for aviation and travel. It is borne out of the intention to inform, educate as well as alter perceptions with balanced reportage.
Previous Sosoliso: a fatal painful crash with a combination of bad decisions
Next FAAN restores power at MMIA