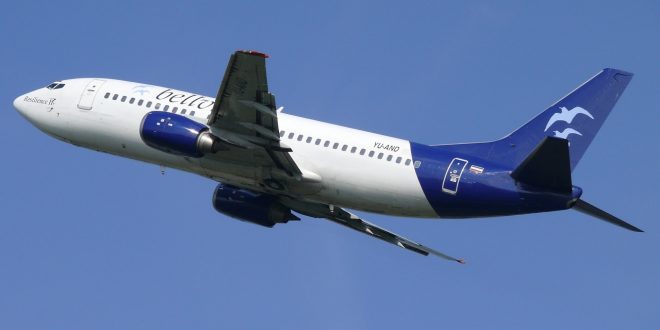 Bellview B737 -300 with registration number YU-AND

Bellview Airlines: A tale of life, peak and plunge

NigerianFlightDeck 14th August 2016 Blast from the Past Comments Off on Bellview Airlines: A tale of life, peak and plunge 1,704 Views

WHEN the name Bellview Airlines is mentioned, people will remember it as one of the airlines that came up when the country needed more airlines to handle the teeming passengers in the country.

Owned by Kayode Odukoya, Bellview was at a point also the toast of the Nigerian Skies and was the biggest wig on the West-Coast route as the airline strode like a colossus, the airline was founded in 1992 and operated scheduled passenger flights within Africa as well as to London out of Murtala Mohammed International Airport, Lagos.

Bellview according to archives tried to expand at some point establishing a subsidiary in Sierra Leone in 1995, which later merged back into its parent company.

The airline plied a couple of routes domestic, continental and international. This was as a result of a growing fondness for Bellview airlines in the country and beyond.

Its main International route was in Europe, United Kingdom London (London Heathrow Airport) and the airline was also designated as one of the three carriers to reciprocate the United States of America Open skies Agreement signed by Dr. Kema Chikwe along with two others, Arik and Virgin Nigeria, that did not meet fruition for the airline as things got bad before it could ever start plus the United States Federal Aviation Administration (FAA) had some stringent rules on Category One that did not help the airlines’ case.

Bellview in its 12 years of existence had not had an accident and so when it happened, it shook the airline to its core and the ripple effect was what eventually led to the airline’s untimely demise. On October 22, 2005, Bellview Airlines Flight 210, a Boeing 737-200 aircraft with 117 people on board, crashed shortly after taking off from Murtala Mohammed International Airport en route to Nnamdi Azikiwe International Airport, killing all 117 people on board. Bellview grounded all flights on the next day, but resumed operation again on October 24.

Then on December 19, 2005, a Boeing 737 operating a Bellview Airlines flight between Lagos and Freetown made an emergency landing at Kotoka International Airport in Accra, Ghana due to hydraulic problems. On the following day, Nigerian authorities ordered all Bellview flights to be grounded and suspended the airline’s license until December 22.

Since the crash, the airline had been struggling with issues of compensation to victims, flight delays and cancellations, inability to secure funding to boost its operations and issues of maintaining its aircraft but still it hobbled on, hoping to transcend the challenge.

Then the Nigerian government set a deadline of April 30, 2007, for all airlines operating in the country to re-capitalise to avoid being grounded, in an effort to ensure better services and safety (An action that was caused by the Bellview, Sosoliso crashes of quick succession in 2005).  Bellview Airlines satisfied the criteria of the Nigerian Civil Aviation Authority (NCAA) and was subsequently re-registered for operation.

Still struggling but doing its best the airline finally buckled in October 2009 suspending all operations following the suspension of its London Heathrow services. Bellview Airlines’ in September 2009 had a spat with passengers in a free-for-all as stranded passengers of Bellview Airlines unleashed bedlam on Bellview Airlines’ officials. The airline attributed their inability to fly their passengers to a technical problem even during that time, the airline had an aircraft out of the country for maintenance and was unable to pay the fees and get the aircraft back on time

Then the big one, as Bellview Airline’s problems were compounded further with a notification from the International Air Transport Association (IATA) that it has suspended the airline with immediate effect from the association’s Clearing House.

The notice from IATA Regional Country Manager, Billing Settlement Plan (BSP) Participants and all its Accredited Travel Agents, IATA asked them to stop immediately all ticketing and refund transactions through the Global Distribution Systems (GDSs) and BSP link. The notice in a statement posted on the IATA website sent to the Nigerian Civil Aviation Authority (NCAA) read, “We would like to inform you that IATA has suspended Bellview Airlines (B3 -208) with immediate effect, as the Airline has ceased operations. The suspension from the BSP is in accordance with the provisions in Resolution 850 Attachment F.”

Bellview Airlines grounded its operations, both domestic and regional, having faced various challenges, including lack of aircraft to ply their routes but told the world that it was only trying to restructure to provide efficient service to the passengers, stressing that the carrier tends to bounce back next month when the six aircraft it ordered for will be flown into the country.

And with those famous last declarations, the airline became a relic of Nigeria’s aviation history with some of their aircraft found scattered around airports in the country, going as scrap on the aircraft graveyard.

All pictures on this report are culled from airliners.net

Nigerianflightdeck is an online news and magazine platform reporting business stories with a bias for aviation and travel. It is borne out of the intention to inform, educate as well as alter perceptions with balanced reportage.
Previous Two ex-NAMA staff docked for forceful breaking, entry into official quarters
Next IATA call on governments to clamp down on rogue Lithium Battery Shippers