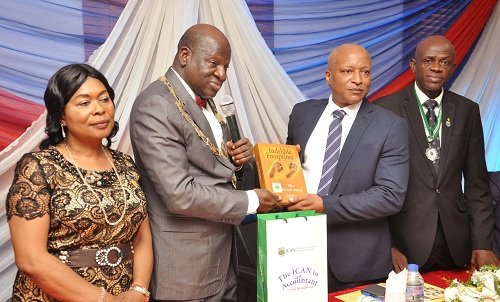 ARIK AIR says it still has its sights set on recommencing it’s suspended international operations but that the plans may take some time giving that the processes are complex and coupled with issues inherited from the past management.

Managing Director of the airline, Captain Roy Ilegbodu made this known earlier today as the airline played host to the 54th Institute Chartered Accounts of Nigeria ( ICAN), Alhaji Razak Adeleke Jaiyeola at the Arik Headquarters in Lagos.

Captain Ilegbodu who was responding to comments and questions from the Institute’s delegate who came for the visit assured that the international operations will happen but not so soon especially with the debt the airline accrued on the international stage the first time out.

He said,” We plan to recommence modalities for our New York and other international operations sooner or later. Sometime next year we will commence the process, we will look at the critically because the process is complex. This process is not easy, it would take at least a year or eighteen (18)months to get back to that stage.”

“It will happen, but it will not happen soon as the past management left a lot of debt and they need to be addressed before we fly to other routes internationally.”

The Arik boss however said the current management was on the threshold of taking the airline to greater glory as it has stabilized the ship.

” We’ve had our ups and downs but we have stabilized and are consolidating. In the near future, you will see an airline that is better than before.”

He expressed hope that the relationship it shares with ICAN would wax stronger stating that Arik as an airline has over five chartered accountants in its employ and is not hesitant to employ such top notch professionals into its service.

Speaking earlier, the 54th ICAN president appreciated the great strides in Arik and the renewed vigour that has championed the airline’s turn around.

” We appreciate the great strides of Arik , we appreciate the renewed vigour and the consolidation in the airline that has kept it . We also want to thank you for engaging our members of the institute and tell you it is a good development and also enjoin you to employ many more.”

The ICAN President, hinted at areas of immediate partnership, with reference to its technology conference coming up 29th and 30th of April asking the airline give its members sponsorship.

Alhaji Jaiyeola said the conference was about creating awareness and keeping its members abreast with the latest and most convenient technology in Information Technology ( IT), Artificial Intelligence ( AI), the Internet and other technology that can be deployed to make their works smoother and so they don’t become irrelevant.

Speaking Coordinator IDSICAN, Mrs. Comfort Eyitayo advised the airline to maintain good corporate governance as its watchword to avoid the unfortunate situation of the past.

She further advised the airline to to minimize their route expansion so as not to bite more than it can handle as well as emphasize more on safety, On Time Performance( OTP) as well a shave a good financial agreement with its service providers.

Nigerianflightdeck is an online news and magazine platform reporting business stories with a bias for aviation and travel. It is borne out of the intention to inform, educate as well as alter perceptions with balanced reportage.
Previous FG commences restructuring, recapitalization of BoA with N250bn in 90 Days
Next FAAN assures of safety as Easter draws closer