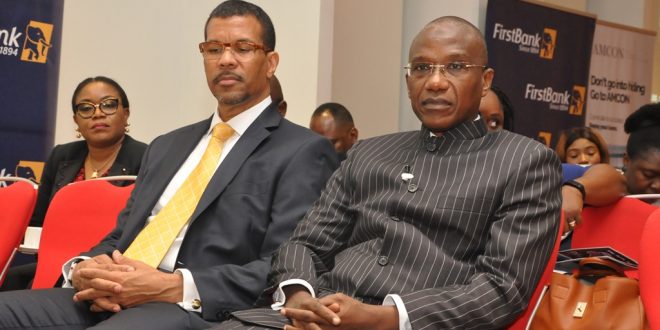 MANAGING Director, Asset Management Corporation of Nigeria ( AMCON), Ahmed Lawan Kuru has identified some areas where corporate governance is sorely lacking in the aviation industry stating that the factors have led to the demise of many airlines in the country.

This is just as he said that given the constantly deteriorating state of the nation’s airports and the bad management of the facilities therein, concession governed by due process is the only way to go.

Kuru, made this known today at the 3rd Edition of the Colloquium organised by the Nigeria a Travel Market (NTM) where he pointed out major challenges of airlines and even airports because of lack of corporate governance.

According to Kuru, examples of poor corporate governance in Nigeria stems from Board of directors being represented by familial relations ” father, mother, son” who according to him have no training to qualify as board members.

Other examples of poor governance, he said, also include lavish lifestyle of owners taking precedence over payments of pilots and engineers, owner of airline and staff becoming contractors for services thereby compromising standard.

He said,”Board of Directors are represented by “Father, Mother, son” who have no form of Aviation/ Airline training to qualify to be on the Board. Also lifestyle of owners takes precedence over payments to Pilots, Engineers etc and owners and staff are contractors for service, thereby compromising standards and quality. In most cases overpricing services.”

He went on to state that airline staff become flight ticket agents, in most cases creating artificial “full capacity” situations where when passengers eventually board, a lot of seats are empty.

He gave other poor corporate governance structures,”Staff loyalty is only to the owner, not to the Company and suppliers of parts, lessors, line maintenance providers, fuel suppliers, are not paid as at when due. They withdraw support and the airlines tether to the point of failure. Them airlines open routes without proper study thereby resulting in additional expense instead of income. Most airlines enter into trouble the moment they enter into the international route, where it is difficult for them to compete.”

He charged the NCAA on regulations stating that they are either weak and that the NCAA,”lacks the courage to enforce compliance based on current standards or need more fine tuning to ensure effectiveness of the airline.”

“The Aviation industry is as important as the Health Industry because it deals with the lives of travellers. It requires more regulation than even the Banking Industry. It is only in Nigeria that an Airline can abandon you at the airport for more than five (5) hours without any recourse. Indeed, there are consequences for frequent cancellations, however I cannot recall any airline punished in the recent past. Equally disturbing is the state of the Aviation infrastructure.”

On the way forward, he said that for any change to be effected in the Corporate Governance of the Airline, it must be regulatory-driven, self-regulation has not worked so far.

“Some of the areas that require immediate attention include: Cash flow for setting up Airlines must be professionally scrutinized to make business sense. The Aviation Industry operates on a low profit margin and a low profit margin requires prudence that can only come with good Corporate Governance.”

“Provision of affordable sources of funding and access to foreign exchange. Scrutinize the ownership and source of funding of the prospective Investors to confirm fitness. Vet and check all the prospective owners of the company. Conduct routine and deep examination of the operations and books of the Airline to ensure compliance to set standards. Existing standards must be enforced and airlines penalized for non-compliance.”

“Appointment of Independent Directors with requisite experience on the Board of all Airlines. Given public interest, sole-proprietorship should be discouraged. Just like in banking, ownership should be diversified. Adoption of the code of Corporate Governance for the Aviation Industry,” he said.

Speaking earlier Convener of the Colloquium, Simon Tumba stated that corporate governance was weak among Organisations in the country but the airline industry was far worse.

Tumba said, “Generally corporate governance in most private enterprise in Nigeria is weak, but the airline industry in Nigeria is worse. We believe it is a major contributory factor to the dwindling fortunes of the industry or its stunted growth, or lack of it. ”

“We have observed how some strong airlines have almost vanished due to lack of financial discipline. How do you describe a director of an airline, who will take $10,000 for a weekend spree? Or give a Japanese publication a $20,000 advert because the advert executive flash her laps before the director? Or how some aircraft were purchased at unbelievably exorbitant rates. I can go on and on. “

Nigerianflightdeck is an online news and magazine platform reporting business stories with a bias for aviation and travel. It is borne out of the intention to inform, educate as well as alter perceptions with balanced reportage.
Previous Africa Prudential partners cooperative societies on technology adoption
Next Immigration intercepts, arrests 8 Ghanaians at MMIA for human utrafficking