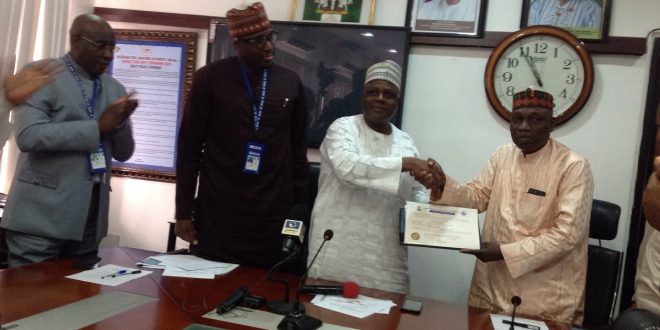 At the award ceremony of certificate at the NCAA head office, Director General of NCAA, Capt Usman Muhtar who handed the certification to Managing Director Federal Airports Authority of Nigeria (FAAN), Engineer Saleh Dunoma said obtaining of the certification was important but sustaining it is vital.

He said first attempt to certify the airport and others hit the rocks 2006 leading to a more purposeful coordination to scale the hurdle.

he further confirmed that the Lagos airport has been very safe and has been endorsed for Boeing 747 jumbo 400 and that the airport has category 9 firefighting for day and night operations.

“Our airports have been very safe because we take in domestic and international operations day and night. It has category 9 firefighting facility. The certificate issued on 18th September 2017 will expire three years from now”, he said.

At the award ceremony of certificate at the NCAA head office, Director General of NCAA, Capt Usman Muhtar said is important but sustaining is vital.

Mukhar reeled out benefits of the certification stating that it is noteworthy that certification is an enabler for the attainment of a regional hub which Nigeria desires for Lagos and Abuja.

“Distinguished Ladies and Gentlemen, while certification might be tedious and capital-intensive, it however has a number of benefits: Aerodrome certification provides the baseline for continued monitoring of compliance with the standard specifications. The certification status of an aerodrome is published in the Aeronautical Information Publication (AIP) and it facilitates the identification and closure of critical infrastructural gaps. ”

“Aerodrome certification enable states to enhance the competency level of safety critical manpower as required for safe operations. It leads to implementation of airport collaborative decision making (ACDM) as required by ICAO ASBU as well as enhances aerodrome capacity; enhances the net-worth of an airport, It also increases competitiveness and potentials for a regional hub and Aerodrome certification attracts external funding.”

Mukhar said,”while still basking in the euphoria of the issuance of the first aerodrome certificate, we should not lose sight of the additional responsibilities that post certification bestows on the Regulatory Authority as well as the Certified Aerodrome Operator for sustenance of the certification achieved. ”

“Similarly, FAAN has the utmost responsibility of operating the Murtala Muhammed Airport in accordance with ICAO standards and recommended practices, and the Nigerian Civil Aviation Regulations, as well as any special conditions on which the certificate is issued.
The Federal Airports Authority of Nigeria is also required to promptly notify the Nigerian Civil Aviation Authority of any changes in aerodrome services, facilities, procedures or staffing levels that can affect the certification of the aerodrome.”

Responding, managing director of FAAN, Engineer Saleh Dunoma stated that the airport authority would do all it can to sustain the certification as it was part to a systematic plan to reposition the nation’s airports are natural hubs.

Dunoma expressed his happiness saying “I am so happy and humbled that I don’t know what to say. Those of us that know the history of certification of airport in Nigeria will agree with me that it has always been like “starting and abandoned, starting and abandoned”. The greatest beneficiaries are the airlines operators. I want to assure that it is a long process. We have been on it for the last two and half years. A lot of resources have been put in it. We want to make sure that the certification is sustained. We have to come out with a system that will work. We assure the DG that we will sustain it”.

Thanking ICAO, NCAA, ACI and airline operators, Engr. Dunoma assured that FAAN focused on MMA because it was the busiest airport. On Abuja airport, he said a lot has been done to certify the airport, adding that the remaining items to be closed on Abuja will be done in a short period of time.

Nigerianflightdeck is an online news and magazine platform reporting business stories with a bias for aviation and travel. It is borne out of the intention to inform, educate as well as alter perceptions with balanced reportage.
Previous A case for low cost carriers
Next Disarray in rally as unions protest concession