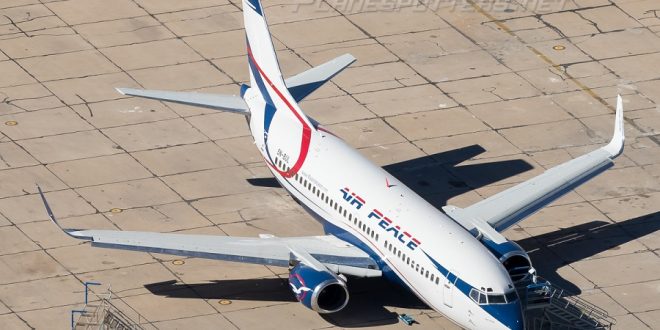 AIR PEACE has increased its capacity on the Asaba route as the airline on Wednesday deployed a Boeing 737 aircraft to service its Asaba operations.

According to airline, the development was in response to the yearnings of members of the flying public for a bigger-capacity equipment on the route.

The Boeing 737 aircraft will support the airline’s 50-seater Embraer 145 jets, which had been servicing the carrier’s Lagos-Asaba-Lagos and Abuja-Asaba-Abuja routes.

The airline, which relaunched its Asaba operations about five months ago on October 8, 2018 after the Asaba Airport was fixed, said demand for air travel on the Lagos-Asaba and Abuja-Asaba routes was already outstripping the capacity of its Embraer 145 jets.

It said its acceptance on the Asaba route was an endorsement of the quality of its flight operations.

A statement issued by Air Peace Corporate Communications Manager, Mr. Chris Iwarah said the deployment of a Boeing 737 aircraft on the route would afford air travellers the advantage of a bigger space.

Iwarah said: “We relaunched our Lagos-Asaba operations and added Abuja to the route on October 8, 2018. We promised then that we would deliver nothing but the best of flight services. Barely five months since we returned to the Asaba route, we have demonstrated beyond a doubt that we are in the airline business to make a difference.

“in five months, our flights have brought relief to leisure and business travellers on the Lagos-Asaba-Lagos and Abuja-Asaba-Abuja routes and we have been inundated with requests to increase the capacity of our aircraft on the Asaba route. As a a customer-centric airline, we have yielded to the demand of the flying public and have strengthened our operations on the route with the addition of a Boeing 737 aircraft to our 50-seater Embraer 145 jets currently servicing the route. Our valued customers can now take more luggage with them and enjoy the comfort of a bigger space.”

Nigerianflightdeck is an online news and magazine platform reporting business stories with a bias for aviation and travel. It is borne out of the intention to inform, educate as well as alter perceptions with balanced reportage.
Previous NERC slams Discos over metering as vandals hit 6 TCN towers in Delta
Next Aero starts flights to Yola with reduced fares, huge load factor