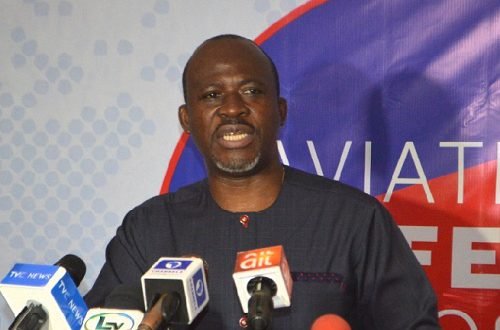 COMMISSIONER, Accident Investigation Bureau (AIB) Nigeria, Engineer Akin Olateru has revealed that the foremost investigative body in the sub-region has instituted training of over 30 personnel and is building capacity as it gears up to take the challenge of investigating multi-modal transportation accidents and incidents like its contemporaries world-over.

This is just as the AIB has initiated talks with the African Development Bank (AfDB) to aid the continent in the continued sponsorship of the Safe Skies for Africa initiative following the withdrawal of the United States on the program established by President Clinton April 1, 1998, which aims to improve the safety and security of aviation on the continent.

Olateru made these known at the weekend during a press briefing held in-between the AIB Nigeria symposium on Aviation Safety in conjunction with the United States National Transportation Safety Board (NTSB) and the Safe Skies for Africa held at the Radisson Blu Hotel, Ikeja.

The AIB helmsman who spoke on the Multi-modal transport investigation explained that it was already on the threshold of being able to carry out investigations on all modes of transportation once the Nigerian Senate passes the Bill into Law, explaining that the agency is training personnel to fit into the role.

According to him, his challenge is not going to be easy but the bureau will methodologically use the right processes and procedures to get to the root of accidents in rail, road, air and marine and bring out safety recommendations that would add value to the entire system in the long run.

He said, “We are currently working on the possibility and approval for AIB going into multi-modal accident investigation, going multi-modal means we can investigate not just air accident but rail, marine, road etc We are joining nations round the world who operate this multi-modal system. Last year the Federal Executive Council (FEC) approved our proposal the new draft bill for the AIB. Before the senate went on recess the Bill is right on their table. Before the year runs out hopefully, the AIB will be investigating other transport means.”

“When you look at accident investigation whether maritime, rail or road, the end goal is the same, to provide safety recommendations that would make the system better. In the last one year we have sent 30 investigators to train on multi-modal accident investigations and another 2 are going in September. We are closely working with the United States NTSB and the Singaporean NTSB and these trainings include extensive On the Job Training (OJT) to support them with relevant experience they can tap into and share from.

On the ending of the Safe Skies for Africa program, he expressed sadness saying that he could not speak for the United States government but stated that Africa also needed to look inward to strengthen their aviation safety programs.

“I think we African can put heads together to help itself, the reason: when an aircraft goes down, it does not distinguish nationality.

“It is my initiative to get the AfDB to sponsor this project for safer skies for Africa. I had a meeting with the International Civil Aviation Organization (ICAO) President speaking on how the AfDB can sponsor the Safer Skies for Africa through ICAO. It is so because AfDB can sponsor only through an unattached independent agency like ICAO. And for the next meeting clear cut modalities can be put in place to get this sponsorship running, Olateru said.

Nigerianflightdeck is an online news and magazine platform reporting business stories with a bias for aviation and travel. It is borne out of the intention to inform, educate as well as alter perceptions with balanced reportage.
Previous FAAN to close Enugu Airport Aug. 24 for runway reconstruction as Air Peace commends FG
Next ART scribe scrutinizes FG’s 50% pilgrim concession to Saudi carriers