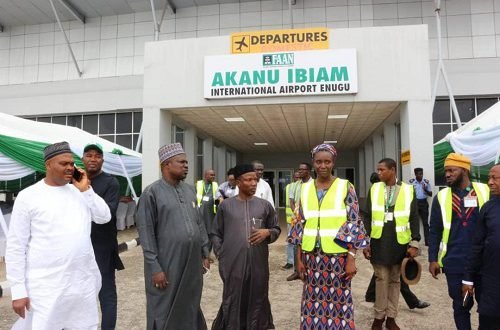 FEDERAL Airports Authority of Nigeria (FAAN) has announced the closure of the Akanu Ibiam International Airport Runway in Enugu will be closed for major repairs and works on the airfield from midnight on 24th August, 2019.

This is just as stakeholders have commended the action with Air Peace one of the carriers that ply the airport pledging total support for the decision explaining that the decision was decisive to entrench safety.

“Federal Airports Authority of Nigeria (FAAN) hereby notifies airlines, passengers and all other stakeholders that effective 00:00 on 24th August, 2019, the runway at Akanu Ibiam International Airport  in Enugu  will be closed for major repairs and works on the airfield.

“This move is aimed at resolving  the existing Safety/Security  concerns to flight  operations. A date to reopen the runway will be  communicated in due course.

Meanwhile in a statement from the Chairman/Chief executive of Air Peace, Allen Onyema, he commended the President, Muhammed Buhari’s resolve to attend to the infrastructural decay in the industry and called on government to go all out to ensure the runway is put in order.

The statement read,” management and staff of Air Peace wish to commend the FG for the decision to close the Enugu international Airport in order to allow a proper repair and maintenance of the airports runway which has given us serious safety concerns.

“For the avoidance of doubt, Air Peace is fully and totally in support of this decision. Though the decision will affect the traveling public and, of course, the airline, we place the safety of the flying public, our crew and equipment above any commercial benefits.

“The government should go all out to put everything in place, within the period of the closure, that would make the airport rank among the best international airports in the country. We plead with the Federal Government to make the airport a 24hr flight operations airport by improving the night landing infrastructure.

“We will not fail to thank the Federal Government for the appointment of Capt. Yadudu as the Managing Director of FAAN. His appointment is a testimony to the Federal Government’s resolve to put result driven persons at the helm of its agencies. Air Peace is not alone in this thought. Since his coming, airlines have started enjoying the services that would definitely improve the standards in the industry. “

Nigerianflightdeck is an online news and magazine platform reporting business stories with a bias for aviation and travel. It is borne out of the intention to inform, educate as well as alter perceptions with balanced reportage.
Previous Picture stories that made the Sallah week
Next AIB trains over 30 personnel on multi-modal transport investigation