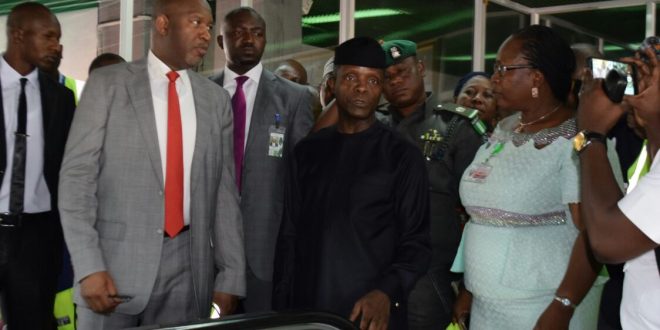 Acting President Yemi Osibanjo flanked by the Minister of State (Aviation) Senator Hadi Sirika as they are being conducted round the Murtala Muhammed International Airport today.

ACTING President Professor Yemi Osibanjo yesterday took the aviation industry by surprise when he paid an unscheduled visit  to the Murtala Muhammed International Airport (MMIA), catching industry parastatals and workers at the airport of guard.

Osibanjo arrived the MMIA at 3-00pm in company of Minister of State, Senator Hadi Sirika and  security operatives.

It was learnt that the acting president was in Lagos for other engagements but took the time out to move round the airport for an on the spot assessment of facilities and work done and undone.

While at the terminal, the Acting President and the Aviation Ministers were conducted round the travelator and three conveyor belts by the General Manger, Mechanical, FAAN, Engr. Ephraim Nwodo, who explained the workings of the facilities to his guest ,who was  anxious to see the facilities .

Professor Osibanjo was also conducted around VISA issue on arrival, check-in areas, baggage carousel areas where he asked officials in charge of the carousel to switch it on for him to observe.

No interview was granted as the acting president inspected the conveyor belt among other facilities.

Recalled that the conveyor belts at the baggage reclaim area were installed about three years.

During the visit, Osinbajo, the minister of Aviation, FAAN officials led by General Manager , Mechanical were seen talking in hushed tones while inspecting the facilities at the airport.

Nigerianflightdeck is an online news and magazine platform reporting business stories with a bias for aviation and travel. It is borne out of the intention to inform, educate as well as alter perceptions with balanced reportage.
Previous Babalakin advises government against quick fixes of aviation infrastructure
Next Air Peace expands routes, starts Sokoto operations March 1