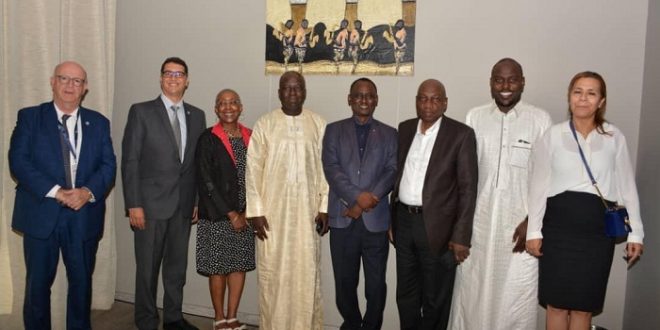 This is just as he stated that the ACI Africa as a regional body is assessing and analysing new threats and initiating preemptive steps to nip them at the bud.

Engineer Dunoma stated this while delivering the opening speech to participants at the 27th ACI Africa Board and Regional Committee Meetings, Conference and Exhibition with the theme “Challenges of Safety and Security in African Airports taking place in Abidjan, Cote D’ Ivoire.

The FAAN boss who maintained that safety and security in today’s aviation cannot be overemphasized said, “Safety and Security are paramount in today’s aviation industry and thus their importance cannot be over emphasised. ”
“ACI Africa working on behalf and for African Airports has focused on these important topics over the years to ensure that safety and security becomes our watch word in Africa.”

Dunoma continued,”ACI is keeping up with the pace of new emeritus threats by developing proactive programmes and solutions to safety and security issues at African Airports.

He noted that the regional body was dedicating funds to improve security via training and technology to assist member states.

He said,”Each year, there is a dedicated annual budget geared towards improving safety and security by providing training and assistance to member airports.

The strategy is aimed at empowering member airports by training security and safety experts who will I turn perform peer reviews at no cost to airport members.”

He also stated that, following the ACI African Airports Development Programmes, a lot of successes has been recorded.

Another ACI Initiative is the APEX in Safety and Security programmes, which are airports peer review based on ICAO regulations and ACI best practices

On safety, Engr.Dunoma said that, based on the IATA 2017 Airline Safety performance release, Sub-Sahara Africa has continued to make strong progress on safety.

“Sub-Saharan Africa has continued to make strong progress on safety. Airlines in the region had zero jet hull losses and zero fatal accidents involving jets or turboprops for a second consecutive year. Both the turboprop hull loss rate and all accident rates declined against the average of the previous five years”.

Nigerianflightdeck is an online news and magazine platform reporting business stories with a bias for aviation and travel. It is borne out of the intention to inform, educate as well as alter perceptions with balanced reportage.
Previous Air Peace takes delivery of 5th ERJ 145, set for Sokoto, Katsina flights
Next Nigerian dispatcher calls for review on charter flights laws at African Aviation Safety Conference