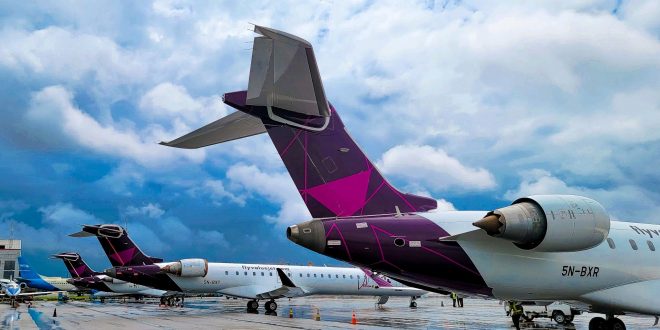 Nigerian start-up airline ValueJet has unveiled its expansion plans that would see it spread operations to other key destinations starting with Jos in the Plateau by this February while it keeps its eyes on Akure, Yola, Kano, and Gombe.

The airline which reached a 100 days of operations has also announced plans to acquire three additional CRJ equipment to its fleet including  cargo aircraft as the airline says it is set to equally run scheduled cargo services in Nigeria.

Chairman of ValueJet, Mr. Kunle Soname, while speaking on the milestone thanked the passengers for being part of history and patronage in the past 100 days of the existence of the airline when it launched flight services on October 4th, 2022, with its CRJ 900 90-seater aircraft, recording above 97 percent load factor.

He remarked that the airline was no stranger to the industry and would base its services on the need for the right pricing.

Speaking on its 100 days since ValueJet started operations, the Managing Director of the airline, Capt. Dapo Majekodunmi said ValueJet has been able to stabilise it’s operations and understand the market.

He also stated that the airline is working assiduously to bring down the cost of flight tickets without compromising safety.

On route expansion, the airline chief further stated, “The expansion will be gradual to other stations. We would like to maintain and concentrate on the six stations Lagos Abuja Benin, Asaba, Port-Harcourt and Jos with an Ontime departure of above 95%.”

“We are keeping our eyes on Akure, Yola, Kano, and Gombe. Those are destinations with great potential. The vision of the airline still remains the focal point. That is making flying available for everyone.”

Capt. Majekodunmi further disclosed that the three additional CRJ aircraft are expected by the third quarter of 2023 while the aircraft would be a cargo configuration CRJ 200, saying that would be the first such cargo plane operation in West Africa.

For its 100 days operations milestone celebration, the carrier announced that it would, from January 16, 2022, introduce promo fares to its teeming customers that are as low as N40, 000 for a one-way trip to the destinations the airline operates.

Team Lead, Marketing for ValueJet, Ayisat Titilope Adams said they have identified a niche in the sector, the need for fair pricing amidst the rising cost of commercial aviation to the average customer compounded by tough economic realities for air operators.

She said, ‘’ValueJet was founded with a mission to make air travel affordable to everyone, and a vision to build a global airline, connecting people with places while using modern air travel. Value Jet Airline is here to add value to Nigerians flying populace.”

Nigerianflightdeck is an online news and magazine platform reporting business stories with a bias for aviation and travel. It is borne out of the intention to inform, educate as well as alter perceptions with balanced reportage.
Previous Court adjourns AON, FG, et al’s transfer motion to February 13
Next NIGAV 2022: NiMet boss, Matazau to receive data support achievement award