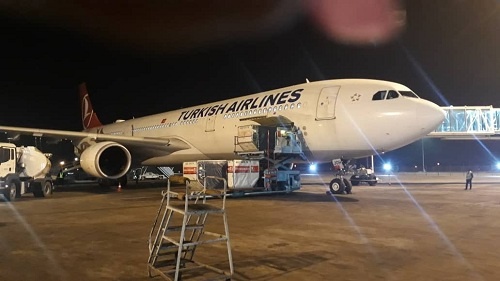 Turkish Airline Airbus A330 at the Nnamdi Azikiwe International Airport

Updated: Turkish Airline complies, changes aircraft on Abuja route to A330 instead of smaller B737

NigerianFlightDeck 14th December 2019 Aviation News Comments Off on Updated: Turkish Airline complies, changes aircraft on Abuja route to A330 instead of smaller B737 146 Views

IN response to the order issued by the Nigeria Civil Aviation Authority (NCAA) directing Turkish Airlines to suspend its operations into Nigeria until the airline is ready to operate into the country with the right aircraft, the airline operated into Abuja with a much larger Airbus A330 today.

Minister of Aviation, Senator Hadi Sirika who confirmed this on his official twitter page said,” Turkish Air operated A330 to Abuja today as against the small B737 in apparent response to our suspension order, we needed to get to this, Anyway…”

According to the Federal Ministry of Aviation official Facebook page, officials of the airline, alarmed by the prospect of losing their Nigerian market, had rushed into a meeting with the Nigerian authorities to pledge total commitment and compliance with the conditions given to them in order to continue their operations in the Country.

Turkish Airlines has been notorious for their shabby treatment of Nigerian travellers over time, especially when they have to arrive their destinations without their checked-in luggage. This has always given rise to security issues at the airports with protests by affected passengers.

However, the airline has now shown commitment to improve its treatment of Nigerian travellers by operating into the Nation’s capital with a bigger and more comfortable aircraft.

Reacting to the development, Aviation Minister Hadi Sirika described it as commendable, saying that the situation did not need to arise in the first place, with the Airline waiting for the strong-arm handling before doing the right thing.

“No foreign airline operator would henceforth be allowed to treat Nigerian travellers with disdain,” according to the Minister, warning the others to take a cue from the Turkish airlines experience.

Sirika also promised Nigerians better flying experiences as the nation’s aviation industry is set to undergo major developments in the coming years, with the implementation of the stakeholder-developed roadmap.

Recall, the NCAA in a letter NCAA/ DG/12/16/60 directed to the airline’s Country Manager on December 11, 2019 threatened to suspend the airline until it decides to use the right aircraft for Turkey- Nigeria operations after the airline had arrived with a recent flight without 85% of passengers’ baggage onboard. https://nigerianflightdeck.com/2019/12/12/ncaa-slams-turkish-airlines-suspends-carrier-from-nigeria-over-baggage-issues/

The CAA had given the airline a grace to effect the change or the suspension shall be effective from the 16th December, 2019

The NCAA letter had read in part,” The Nigeria Civil Aviation Authority (NCAA) wishes to extend its compliments to Turkish Airlines and also express its serious displeasure about the recent cases of not bringing passengers into Nigeria together with their checked-in baggage.

“These incidents, which has been going on for two weeks, has become so bad that the most recent flight arrived without 85% of passengers’ baggage onboard. Our Airport Authority have been facing serious crises controlling the passengers at the airport whenever they arrive without their baggage’s.

“This issue has made passengers to carry out several mob actions at our airport and it is a great threat to our airport facilities. https://nigerianflightdeck.com/2015/12/28/minister-suspends-airport-manager-two-others-over-security-breach-at-naia/

“In view of all these, and the series of meetings held with Turkish Airlines personnel, which did not yield any solution to the problem, the NCAA is therefore left with no option than to direct Turkish Airline to suspend its operations into Nigeria until such a time when the airline is ready to operate with the right size of aircraft that can transport all passengers with their baggage at the same time.

“If no remedial action is carried out by your airline this suspension shall be effective from the 16th December, 2019,” the letter read.  https://nigerianflightdeck.com/2016/01/04/abuja-airport-breach-its-not-business-as-usual-fg/

Nigerianflightdeck is an online news and magazine platform reporting business stories with a bias for aviation and travel. It is borne out of the intention to inform, educate as well as alter perceptions with balanced reportage.
Previous Arik Air resumes flights to Asaba, increases Owerri frequency
Next NCAT, Aero, FAAN and other activities that colored the week