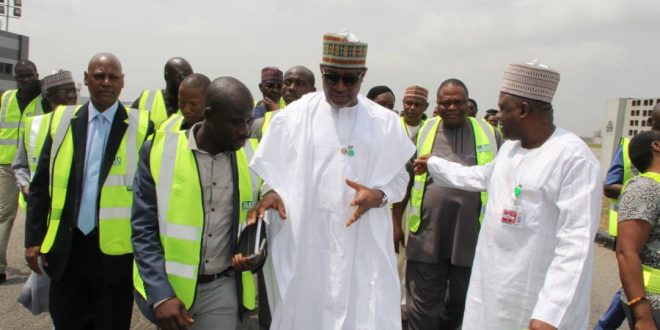 MINISTER of State, Aviation, Senator Hadi Sirika has said that government is not the problem of airlines and that it was doing its best to fix some of the challenges these airlines are facing of which some of them brought about themselves with bad business planning.

This is just as the Minister reacted to the Dana exit door incident stating that it was not as serious as it was being made to look especially as the Nigeria Civil Aviation Authority (NCAA) is currently investigating.

Speaking during an unscheduled tour at the Murtala Muhammed Airport in Lagos, Sirika said that two airlines owe a total of N513 billion to aviation parastatals and present administration would not allow airlines to accumulate debts and then run to Abuja to ask for waiver.

He said the domestic airlines would make more money if they get their model right adding that every one of them wants to run scheduled flights whereas “there is a lot they can do in aviation.”

“I think it is getting their priority right and doing the business model that would bring money for them.
“Under this administration, it is not going to happen to allow them to continue to pile debt and go to the villa and the debts are either waved off or the debts are post- dated. No villa will call any airline. There is no door that is open for such practice,” he said.

He therefore advised the airlines to get their act together to “reorganise, re-engineer and take advantage and be futuristic and looking at the bigger future and organize themselves and take advantage of the Single African Air Transport Market (SAATM) rather than sit while the train is moving.”

Speaking on the Dana incident, Sirika said,” Now that is well documented and NCAA is presently investigating it and the reason why NCAA is investigating is because it falls within their purview to investigate minor incident of this nature.”

“If it had been serious accident or serious damage to the aircraft it would have been the Accident Investigation Bureau (AIB) investigating it.”

“I’ve been following up since yesterday when I learnt of it with NCAA. They are investigating it and within very few hours, within one day also, they will come out with a report and we will explain to Nigeria what happened. ”

“And I want to use this opportunity to say that what has happened though very scary and uncomfortable, it is an incident that is minor and that kind of thing would not happen in-flight at altitude as to cause an accident or serious degree incident. So we thank God for that. ”

Nigerianflightdeck is an online news and magazine platform reporting business stories with a bias for aviation and travel. It is borne out of the intention to inform, educate as well as alter perceptions with balanced reportage.
Previous Dana Air decorates captains, first officers says it trained 27 officers in 2017
Next Sirika explains aircraft exit door mechanics appeals to air travelers