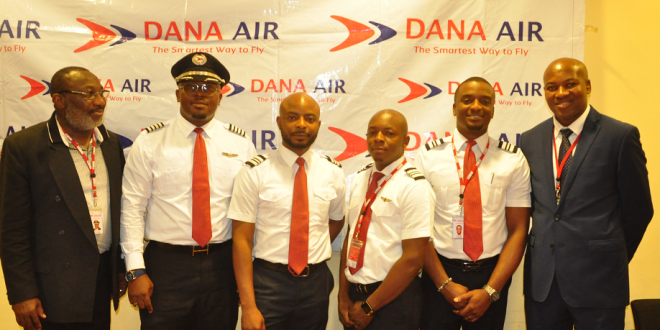 DANA Air today decorated two captains and three first officers as its ongoing plans to build local capacity, deepen its niche of providing safe and legal operations as an airline.

This is just as the Dana management team revealed that it has trained 27 Nigerian pilots in 2017 and may still have to decorate more pilots soon to complement its growth.

The airline, in a brief ceremony, decorated as Captain, Kalu Sylvester and Ibrahim Kazeem while it decorated Ilesanmi Ayotunde, Afolabi Damilola and Lawal Wahab as First Officers.

Speaking at the ceremony, Director of Flight Operations, Captain Segun Omole stated that he was looking at the newly decorated pilots like fresh university graduates eager to contribute their quota for the growth of the industry.

“When our aircraft first came we had to use a foreign crew because not many Nigerians were trained on the MD-83s. We knew that we would have to transit to local crew and from 20% Nigerian crew working in Dana, we can now boast of a 90% crew. There are some risks in training but Dana continues to train. We still have some more pilots in training and maybe in a few months from now we may have more decorations,” Omole said.

On how many the airline has trained do far and how the pilots will impact on the airline’s operations visavis fleet size, both captain Omole and Accountable Officer, Obi Mbanuzor made separate inputs.

On trained pilots, Omole stated,” we trained 27 Nigerian pilots in 2017 and we have decided to continue to bring I the new graduates into Dana Air because if you catch them young you can mould them in your culture.”

” We are not saying we do not hire captains, we do but when we train them they imbibe our culture from scratch while hired captains come from a different environment and bring a culture clash. We are trying to endure all our captains come in as First Officers with the opportunity to grow as captains.”

On how all the trained personnel would fit into ha airline’s operations, Mbanuzor said,” you know it takes four sets of crew to operate an aircraft and we have four for now meaning we need 16 crew to fly the aircraft plus we have one aircraft that has just undergone a major check and we still have two pilots there to test fly the aircraft. And we are still planning on acquiring aircraft in the no distant future and if we start training when those aircraft come in then we are already late. Currently we have 16 pilots and 17 co-pilots.”

Speaking for the decorated pilots, Captain Kalu Sylvester said the pilots would do their utmost to be good ambassadors and fly the airline’s flag high stating that Dana is the best airline to work with as its procedures are on point.

He commended the management for being steadfast and hardworking

Nigerianflightdeck is an online news and magazine platform reporting business stories with a bias for aviation and travel. It is borne out of the intention to inform, educate as well as alter perceptions with balanced reportage.
Previous National carrier: FEC approves substitution of Lufthansa with AMG to avoid conflict of interes
Next Sirika says bad model not govt. is domestic airlines’ problem