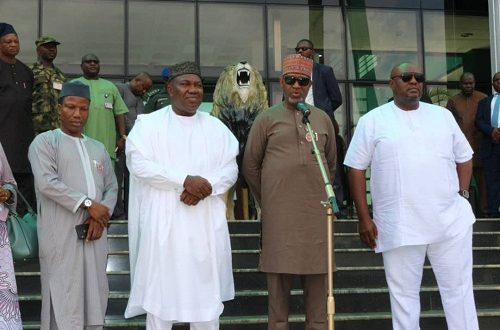 MINISTER of Aviation, Senator Hadi Sirika, Thursday (November 7, 2019) revealed that Federal Government has mobilized the contractor (PW) handling the reconstruction and rehabilitation of the runway and other facilities at the Akanu Ibiam International Airport, Enugu, to site, preparatory to commencement of work.

This is just as he said that government has promised to continue to fund the new Enugu International Terminal which is being handled by CCECC, a Chinese company, reiterating his promise to be visiting Enugu regularly to supervise and ensure that the Federal Government delivers on the airport.

Senator Sirika made this known after a meeting with Governor Ifeanyi Ugwuanyi of Enugu State and an interaction with the contractor to see the level of preparation for the work and review the programme to ensure that he delivers the runway within the time frame agreed.

According to the Minister, all indicators lead to the firm commitment that the airport will be reopened before Easter, while he commended the state governor for the tremendous support, show of concern and participation in what is being done to deliver this airport.

He said, “He has done everything we have asked the state government to do. We commend him also for those tough decisions that he took in overriding public interest. I think he is bold enough, courageous enough and his show of support and love for his people cannot be quantified”.

Senator Sirika, who disclosed that the Federal Government is committed to ensure that the Enugu Airport “will be the best airport in the country” after the rehabilitation, added that “it will be the most efficient and most modernized airport”.

The minister said that President Muhammadu Buhari has promised to continue to fund the new Enugu International Terminal which is being handled by CCECC, a Chinese company, reiterating his promise to be visiting Enugu regularly to supervise and ensure that the Federal Government delivers on the airport.

Senator Sirika equally appreciated the House Committee chairman on Aviation, Hon. Nnaji, for his diligence, persistence and immense contributions to the project, especially the budgetary allocation.

While appreciating the players in the feat, the minister said that the economy of Enugu as well as the state was very central and pivotal to this part of the country, stating that government takes it seriously and must ensure that it continues to play that central role it is playing.

“I want to assure Nigerians that this procurement, the reconstruction and rehabilitation of Enugu airport runway and the existing buildings and other associated works will be delivered efficiently in good time, transparently and prudently,” He said.

Among those that met the Governor were the Managing Director of Federal Airports Authority of Nigeria (FAAN), Capt. Hamisu Rabiu Yadudu, the Chairman, House Committee on Aviation, Hon. Nnoli Nnaji and others

Nigerianflightdeck is an online news and magazine platform reporting business stories with a bias for aviation and travel. It is borne out of the intention to inform, educate as well as alter perceptions with balanced reportage.
Previous UBA partners British Airways, announces 10-15% discounted airfares for loyal customers
Next Air Peace takes delivery of B737-800 NG aircraft to strengthen operations