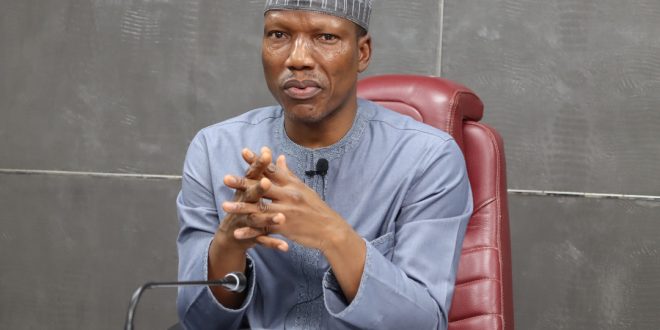 MANAGING Director, Federal Airports Authority of Nigeria( FAAN), Captain Rabiu Yadudu has said that everyday no fewer than four people are arrested at the Murtala Muhammed Airport, Lagos attempting to beat the system.

This is just as he has said that aviation security is reactive but that even as FAAN puts up measures to curb incursions into the airports, new technology or improvisation to beat the security is introduced and when found out the agency learns from it to ensure it is not repeated.

Yadudu spoke after inspecting ongoing works at Runway 18L reacting to questions bordering on the recent stowaway and other security issues.

He described the security issue as a race and that despite the daily wins a meagre percentile will be successful and that shames the whole work being done but that has not deterred the authority from it’s continued security upgrades.

He said,”Aviation security is very important component that is reactive. Anytime there is a violation, we learn something and make sure it does not happen again. Across the world security challenges are all over but FAAN what we hardly tell people is that everyday one to five people are arrested and unfortunately, it is maybe the 0.000001 percent that escapes and is successful but we are working on it.

” It is a race, we are always trying to be on top of the race but sometimes something like this happens and thwarts all out work and that is why we say there is a function of security that is reactive.

“100% functional security today but a new technology or new improvisation would all of a sudden render you vulnerable.

Recall FAAN has put in order and awaiting delivery of visual and thermal cameras and other security equipment including motorized surveillance equipment to raise security at the nation’s major airports.

Capt. Yadudu, FAAN had identified various gaps over the years and has solutions for those problems but because FAAN is an agency of government, unlike the private sector, some of those solutions take time to acquire and implement.

Yadudu said, government processes and due process are necessary and also matter in all we do. A private airport can have a problem today and by tomorrow, it can deploy the solutions to it. We know the solutions to the problems we have, but we have to ensure that the due processes are followed for us to implement them.

FAAN is on the verge of procuring visual and thermal infrared cameras – visuals to cover the areas for a whole day – sunrise to sunset and thermal from sunset to early morning. This will cover within an 8km radius, which is 16km in diameter.

He said during another interview that,” The runway is 3.7km or 3.8km and we are buying about four of those cameras to cover the airfield.

Nigerianflightdeck is an online news and magazine platform reporting business stories with a bias for aviation and travel. It is borne out of the intention to inform, educate as well as alter perceptions with balanced reportage.
Previous Azman Air’s N1.2bn PSC debt, documentation reason NCAA withholding ATL
Next NAHCO takes delivery of new Ground Support Equipment