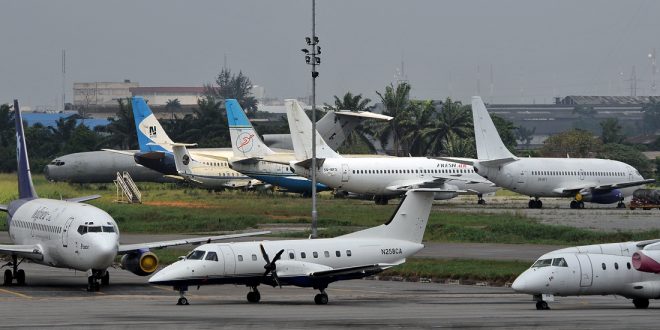 NigerianFlightDeck 7th April 2017 Points of View, Your ViewPoint Comments Off on Regulations on ticket sales charge are national laws and cannot be unilaterally suspended- Ojikitu 640 Views

THE National Civil Aviation Regulations requirements for all airlines to remit 5% of their ticket sales and cargo sales to the NCAA have for a very long time been generating reactions and a number of unresolved issues within the industry. Specifically, the Regulations require: all domestic and international airlines operating in Nigeria to forward to the Authority through electronic platform all relevant documents as Flown Coupons, Passengers and Cargo Manifest, Air Waybills, Load Sheets etc within 48 hours after each flight (NCAR 18.12.1.1).

The Regulations further require that all airlines join IATA / BSP specifically for the purpose of remitting 5% sales charges to the Authority and should execute a contract with the Authority to that effect, (NCAR 18.12.1.2).  Additionally, all Sales Charges or Royalties shall be paid in the currency in which they are being charged (NCAR 18.12.1.5) and all foreign airlines shall submit cargo manifest and continue to pay royalties in a manner prescribed by the Authority before the flight is approved to land or take off.(NCAR 18.12.1.3).

Government through the NCAA has been losing substantial revenue from the Ticket Sales Charges and Cargo Sales Charges because most of the operating airlines were not complying with the respective regulations. Those that did were short-changing the NCAA in their remittances. The NCAA however should be blamed more for these for being too passive for too long in ensuring that the airline operators implement the various provisions of the Regulations sufficiently before now.

In 2015 and 2016, the Ticket Sales submitted by the airlines to the NCAA and presented at a press briefing early this year were respectively N385 billion and N330 billion  from about 15 million passengers in each of the two years. About 5 million passengers were recorded as international passengers and 10 million as the local passengers. If we assume that 2 million of the 5 million international passengers were outbound, and bought their tickets in Nigeria each at an average price of N300, 000, the ticket sales would be N600 billion. Similarly, N80 billion would have been generated as ticket sales by the domestic airlines if each passenger had paid an average of N16, 000. Altogether, the ticket sales could not have been less than N680 billion for each year as against the N385 billion and N330 billion recorded for 2015 and 2016 respectively. Therefore, the expected ticket sales charges (TSC) to NCAA in those two years should not be less than N68 billion

The values of the tickets sales were probably based on the figure presented by the airlines themselves which the NCAA had no system in place to verify as the figures did not match known data or passenger traffic statistics available in the FAAN records. NCAA therefore needs help.

The Cargo Sales Charge collected by the NCAA would not be too different from the Tickets Sales Charge collected if the records available from a source in the industry that has been working with the NCAA are considered. The records showed that the airlines paid NCAA a total of N600 million as Cargo Sales Charges for a period of 3 years (2007-2010). Unfortunately, there were no records to show the values, statistics or quantity of cargo airlifted by the airlines that generated the amount.

The unfortunate thing about the rancor between the NCAA and the Airline Operators is that over the years, they have all been benefiting one way or the other from the statutory revenue through various debt concessions and intervention funds. Now that such benefits are no longer available and they all have to revert to the statutes, there seems to be a kind of love lost between them and the government agencies.

The era of free meal is over when airlines would rather collect intervention funds at 6% interest rate or less than to pay charges on aeronautical services including Landing and Parking fees; where they would rather buy foreign exchange at concessional rate than to pay custom duties or repatriate their foreign exchange earnings home from abroad. Where they fail to pay these charges, they should be contented therefore with poor services in the airspace and at the airports.

While the domestic airlines have defaulted severally in statutory remittance and payment on charges, they also complain generally of high charges on airport and aeronautical facilities, services, including landing and parking, multiple charges and high cost of fuel etc. Discerning minds among the industry stakeholders have tried to examine all these and have severally concluded that the airlines are the architects of the travails of the industry.

Airline operators are in denial of the true situation of the domestic market. Without a conscious review of air fares by the airlines in line with the prevailing dynamics in the market, their business plans and the sustenance of their operations in the industry will come to naught.

The domestic airlines should therefore not expect to sustain their operations and be paying for all the various services and statutory charges by charging N16, 000 on a flight of one hour. At the rate of N300 Naira/Dollar, the airlines do not need the government authority to increase the flight fare from Lagos to Abuja to $50 or N150, 000; anything short of this price is for everyone including government officials to live in denial of the market forces in the industry.

What domestic airlines should endeavour to do further to meet their obligations on the sustenance of their operations and payment of statutory charges is how to reduce their operational cost. First is to reduce the cost of fuel. The airlines should either collectively or jointly with the fuel marketers, reactivate the pipelines supplying fuel to the MMIA airport from Mosimi and the stoppage of bridging fuel supply with multiple tanks. This will eliminate the cost of transportation and the demurrage on the long waiting before discharge and therefore reduce the cost of fuel by about 20% especially at MMIA where about 70% national consumption of the fuel are supplied.

Secondly, the airports need to be classified into about 3 categories depending on the facilities and services that are provided or available and the charges for these services should vary from airport to airport. Lagos and Abuja cannot be in the same category with Kaduna, Enugu Owerri just as none of these will also not be in the same category with Akure, Ibadan, Minna etc. Airlines can therefore operate or route their flights to and from airports which they can afford their services costs .In addition, government should provide night landing facilities at all the airports to encourage the domestic airlines to operate night flights into them with a view to improving their earnings.

Thirdly, Government should create markets for the domestic airlines within the domestic routes by reducing the number of multiple destinations given to some foreign airlines and by limiting or restricting them to either Lagos or Abuja. No foreign airline should fly to Lagos and Abuja, but to Lagos or Abuja and to any other international airport. They could however be allowed as many frequencies daily or weekly to the airports of their choice.

Airlines and government agencies confrontations over statutory debts and service charges are recurring issues and had in the past resulted into debt concessions and government intervention funds to the airlines. There had been other occasions when government had given zero duties to the airlines on the importation of aircraft spares and concession on the foreign exchange rate over the market value.

These concessions were given on recurring debts to various services providers that were in tens of millions and billions of naira. These were monies given to politically exposed operators with poor management structures and inefficient business plans that cannot admit them into IATA/BSP. These were monies that could have been used for the sustenance various operations in the industry. Where and when government intervention funds are provided for the development of any of the industry sector, such funds are recoverable as they are in other climes. How much of such intervention given to the airline sector have been recovered?  Despite all these financial concessions, the airlines are again asking for the suspension of statutory regulations on TCS and CSC remittance which since its inception in the CAA Act and NCARs 2006, they have not been sufficiently complied with.

No one has the unilateral right to suspend any part of the National Civil Aviation Regulations without recourse to any part of the CAA and invariably to the National Assembly. The NCARs are national requirements that had been drawn up in line with the Civil Aviation Act 2006 for standard operational procedures, equipment, infrastructures, safety management, training, etc. The NCARs are also drawn in conformity with the Standards and Recommended Practices (SARPs) contained in all the Annexes to the Chicago Convention to which Nigeria is a signatory.

Therefore, the process of suspending any part of the NCARs must include notification to the ICAO Headquarters. Other than a review, the suspension of any part of the NCAR cannot be acceptable at this time that our position in the ICAO classification is not very encouraging. The wind of change is really blowing; it has blown some airlines off their balance and the rest are the ones jittering and trembling; these are the ones asking for change in the rules; but only the diligent would stand and survive the storm.

Nigerianflightdeck is an online news and magazine platform reporting business stories with a bias for aviation and travel. It is borne out of the intention to inform, educate as well as alter perceptions with balanced reportage.
Previous FAAN opens 2017 internally generated revenue contract bids
Next Traffic increases in February despite travel bans, electronic items’ restrictions, Brexit impact-IATA