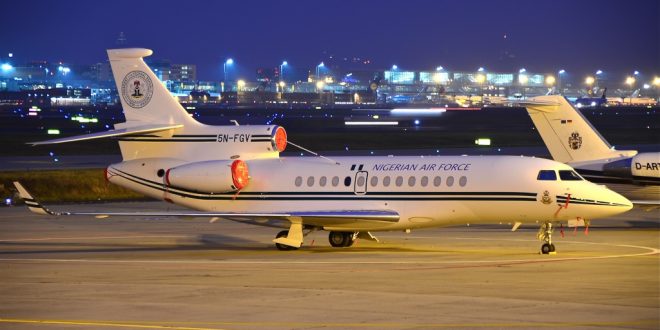 The Presidential fleet has no fewer than 10 aircraft and due to economic realities, the present administration finally heeded public outcry as it has advertised the sale of two aircraft and has directed that the bids for them be quoted in US dollars.

According to the advertorial, interested buyers are asked to inspect the Falcon at the presidential wing of the Nnamdi Azikiwe International, Airport, Abuja, and the Hawker at Cessna Zurich Citation Service Centre, Zurich, Switzerland.

Nigerianflightdeck.com learnt that the office of the National Security Adviser (NSA) which put the advert up, is in charge of the sale, and also pointed out that all bids should be quoted in US dollars.

Confirming the planned sale yesterday, Senior Special Assistant to the President on Media and Publicity, Garba Shehu, said that the government is downsizing the presidential Air fleet.

In his statement,  the newspaper advertisements for the sale of two presidential aircraft, a Falcon 7x executive jet and Hawker 4000, were duly authorized by the Presidency.

The statement reads: “This is in line with the directive of President Muhammadu Buhari that aircraft in the presidential air fleet be reduced to cut down on waste.

“When he campaigned to be President, the then APC candidate Muhammadu Buhari, if you recall, promised to look at the presidential air fleet with view to cutting down on waste.

“His directive to a government committee on this assignment is that he likes to see a compact and reliable aircraft for the safe airlift of the President, the Vice President and other government officials that go on special missions. This exercise is by no means complete.

Already, given the plummet of the economy, people are already hailing the move especially as maintenance for each aircraft cost a millions of dollars which is not available as the country is battling to rise above recession.

Nigerianflightdeck is an online news and magazine platform reporting business stories with a bias for aviation and travel. It is borne out of the intention to inform, educate as well as alter perceptions with balanced reportage.
Previous 9/11: 15th anniversary and lessons for national intelligence in supporting aviation security
Next Delta offers Wi-Fi on every flight between Africa and United States