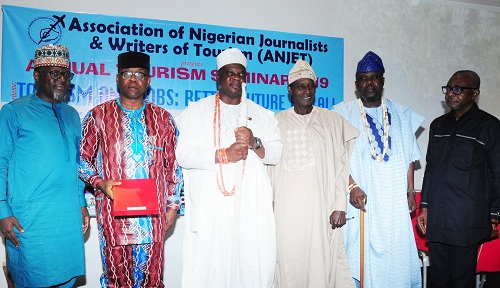 NIGERIANS must stop depending on government to create jobs and tap into the vast potentials the tourism industry has to offer, according to stakeholders and operators of Nigerian tourism sector.

This is just as it was stated that enough budgetary allocation be given the sector to grow and develop it.

These players made this known today as Association of Nigerian Journalists and Writers of Tourism (ANJET) organized a Tourism Seminar at the Eko Hotel and Suites with theme: “Tourism and Jobs: Better future for all”.

Players led by the Olota of Otta, Ogun State, who was the royal father of the, Oba Adeyemi Obalanlege led the charge advising government at all levels in the country to focus more the tourism in order to achieve accelerated development of the country as the oil wealth is fast dwindling

Obalanlege said that Nigerians must stop depending on the government for job creation but get creative to groom most of the enormous tourism potential the country was endowed with.

He said that festivals in each community could be developed by members of such communities to generate revenue while ensuring that the festivals were developed over the years to attract local and International tourists.

He identified the egungun masqurade festival as one of the tourism potential to latch upon, likewise the monumental buildings across communities which could be converted to tourists sites.

” The egungun festival is an opportunity to latch on by the unemployed, different communities have their masquerade which should be developed and showcased to the world.

” Nigerians need not look up to the government for job creation, government is only meant to create an enabling environment for businesses to thrive.

” The second tallest story building in Nigeria is in Otta, it should be better developed to attract international tourists; a lot more monumental buildings across communities can also be converted to tourists’ sites,” he said.

Olowo who was represented by Mr Mayowa Badewa, Deputy Zonal Director, Western Zone, Sabre Travel Network, said that the tourism industry must be prioritized as huge employment opportunities could be derived from the sector.

He said other African countries like: Ethiopia, Kenya, Gambia were doing well in tourism because they had been able to work on improved connectivity, good infrastructures, visa relaxation policy and more.

He, however, urged Nigerian government to collaborate with the private sector, intensify efforts in fighting security and terrorism, create policy for ease of doing business, good and safe roads for tourism businesses to thrive in Nigeria.

” We are known to be the giant of Africa, and Nigeria is not recorded in the list of the top 10 visited countries in Africa because we are not doing things correctly.

” Government should try to allocate huge revenue for the tourism industry annually because the returns will be in multiples at the end of the day.

” There are only two hanging lakes in the world, the one at Colorado, United States of America and the Ado Awaye hanging lake in Oyo which is not well marketed for international recognition.

” The one in Colorado generates over a million visitors annually, we must let the world know what we have and encourage them to visit,” he said.

Also speaking, the President of La Campagne Tropicana Beach Resort in Lagos, Otunba Wale Akinboboye, declared that the power of tourism sector in transforming a community, people and the country, is such that it can’t be neglected and doing so over the years has not augur well for Nigeria and the people.

He gave example of how, he, through La Campagne has succeeded in transforming Ikegun community where his resort ia based to one of the richest and fast developing locality in Nigeria, describing how he has economically empowered the people and transformed their lives and the community.

He recommended such a model to the Nigeria government and Nigerians, urging everyone to local inward and see where they have comparative advantage and latch on to it for the development of the people.

Nigerianflightdeck is an online news and magazine platform reporting business stories with a bias for aviation and travel. It is borne out of the intention to inform, educate as well as alter perceptions with balanced reportage.
Previous UBA Foundation harps on quality education, calls for entries as 2019 National Essay Competition kicks off
Next FG allocates N123bn to transportation ministry on proposed N10.33tn budget, to service debt with N2.45 trillion