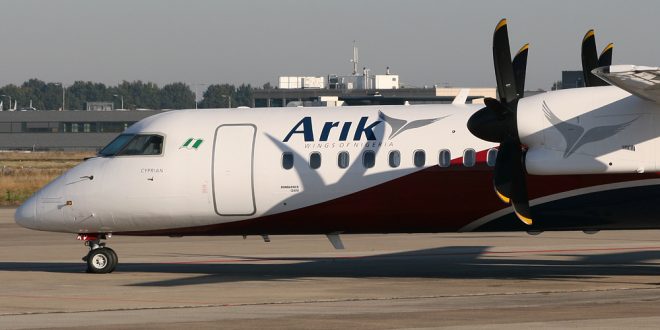 AN Arik Air, Dash 8 Q400 NextGen propeller aircraft, Flight W3304 from Lagos to Accra on March 6, 2018 declared an emergency landing when unknown source of smoke was detected in the cabin 81 miles from Accra.

An eyewitness who was on board the flight and recounted his ordeal said the flight took off at 7.20pm (Lagos time) and 35 minutes into the 55 minutes flight, he started perceiving something burnt smelling

According to his account , smoke-filled the cabin this prompted the cabin crew to start opening the cabins and the lavatories to check if they could trace the source of the smoke without success.

The eyewitness further claimed that while that continued, oxygen masks that were always being advertised during the safety demo prior to take-off could not be deployed and instead they( passengers) were handed tissue papers (otherwise called serviettes) to use to cover our noses to minimize and filter out possible carbon monoxide inhalation.

“We were evacuated into a waiting bus with instruction to leave everything behind in the cabin. Sadly there was no Arik official to address us neither was there any manner of first aid attention given to the passengers to manage stress and possible elevated blood pressures.”

He said,”I’m highly discouraged that this near crash major incident was not reported in the media 2 days after (today is 08/03/2018) and I suspect a cover up by Arik and the authorities. So I have chosen to use the social media to ensure this news gets out. ”

Meanwhile the airline in a reaction confirmed the incident on flight W3 304 Lagos-Accra and stated that the aircraft is in Accra for inspection.
A statement by PR and Communications Manager,Adebanji Ola read:

“Arik Air flight W3 304 from Lagos to Accra on March 6, 2018 declared an emergency in line with standard operating procedures, when unknown source of smoke was detected in the cabin 81 miles from Accra.”

“The captain of the flight briefed the passengers accordingly assuring them that the aircraft was under control and safe for landing in Accra.
The aircraft, a Dash 8 Q400, landed safely in Accra without further incident and all passengers disembarked normally.”

“The aircraft is currently parked in Accra and our team of engineers are conducting comprehensive inspections on the aircraft to ascertain the cause of the smoke, after which the aircraft will be flown without passengers to a maintenance facility for rectification and testing. The relevant aviation authorities in Ghana and Nigeria have been briefed appropriately on the incident.”

Nigerianflightdeck is an online news and magazine platform reporting business stories with a bias for aviation and travel. It is borne out of the intention to inform, educate as well as alter perceptions with balanced reportage.
Previous New MMIA Immigration boss calls for synergy with sister agencies
Next Human trafficking: Immigration places officers on suspension