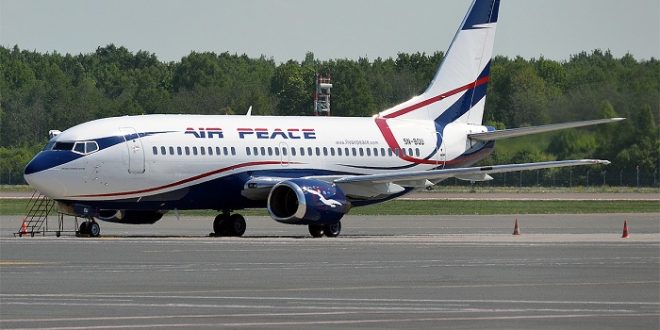 AN unnamed passenger on board Air Peace Flight P4 7121, Abuja-Lagos has been taken into custody by security agents for alerting the airline on a bomb onboard the aircraft that turned out a hoax.

However, it has been revealed that the passenger has a history of mental illness which may have caused his outburst on the aircraft

Passengers onboard Air Peace, according to the airline, commended the crew of the flight for prioritizing their safety and returning to the Nnamdi Azikiwe International Airport, Abuja after receiving information that there was an explosive on board the aircraft.

A statement issued by the Corporate Communications Manager of the carrier, Mr. Chris Iwarah confirmed the incident, saying the operating crew acted professionally and took the decision to return as a precaution.

He attributed the false information to an intending passenger who was denied boarding after the crew suspected that he might be mentally challenged.

“We confirm that Air Peace Flight P4 7121, Abuja-Lagos on Wednesday, January 30, 2019 returned to the Nnamdi Azikiwe International Airport, Abuja after the crew received information that there was a dangerous item on board.

“In line with procedures and our high safety standards, the captain-in-command acted professionally, briefed passengers on board and took the decision to return as a precaution. The aircraft landed in Abuja without any incident and passengers disembarked normally to enable security personnel conduct a check.

“Passengers on board the flight were screened a second time and the aircraft thoroughly checked. At the end of the exercise, the information was found to be a hoax as nothing was found on the aircraft. The aircraft was subsequently cleared to depart for Lagos and safely landed at the Murtala Muhammed Airport, Lagos at about 11.44 a.m.

“The passenger who gave the information has since been taken into custody by security operatives for exhaustive investigation into the incident.

“We commend our valued customers on board the flight for their calm and cooperation while the checks lasted. The safety, security and well-being of our customers and crew will continue to be our priority at all times,” Air Peace said.

Meanwhile, the Federal Airports Authority of Nigeria (FAAN) throwing more light to the situation  explained that the passenger travelled with family who explained his situation.

The airport authority through Mrs. Henrietta Yakubu said security agencies abs medical experts are assessing the passenger but that the flights have been checked and cleared.

“Following the false information, officers of FAAN’s aviation security swiftly evacuated the aircraft passengers. Crew and cargo and a bomb squad immediately conducted a thorough check of the aircraft.”

Nigerianflightdeck is an online news and magazine platform reporting business stories with a bias for aviation and travel. It is borne out of the intention to inform, educate as well as alter perceptions with balanced reportage.
Previous US-TSA commences another assessment visit to MMIA, Delta Air lines
Next FAAN moves PH local operations to old int’l terminal, collapses makeshift tent