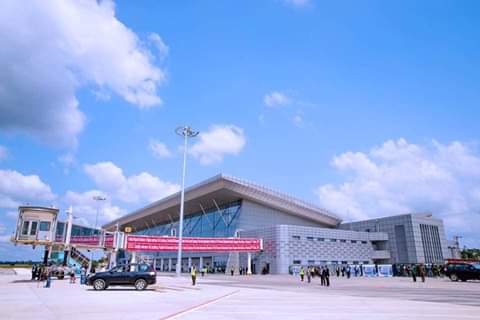 The Air side of the new Port Harcourt International Airport, Omagwa.

FOLLOWING  the recent commissioning and movement of international operations to the new Port Harcourt International Airport, the Federal Airports Authority of Nigeria (FAAN) has collapsed the make shift tent at the airport and moved all domestic arrivals to the old international terminal.

Recall, Managing Director of the Federal Airports Authority of Nigeria, Engineer Saleh Dunoma during the commissioning of the new international at Port Harcourt stated that the relocation would give room for the completion of the old terminal to be put to domestic use.

He said,”Work is going on there(local terminal) it’s a bit slow but work is going on. Of course there are issues because it is not like this ( new terminal) where you conceive and you start construction. We are combining operations with construction and sometimes the contractor is hindered because he cannot go full capacity because we have to accommodate our passengers. It is slow but we will get there, we are almost there. ”

“We are also pushing but now that this is commissioned by the time we move out the international operations here, then we will have a lot of space to work on at the other terminal.”

Nigerianflightdeck is an online news and magazine platform reporting business stories with a bias for aviation and travel. It is borne out of the intention to inform, educate as well as alter perceptions with balanced reportage.
Previous Update: Passenger arrested due to hoax bomb threat onboard Air peace plane
Next Stakeholders at NIPS express diverse opinions on refineriesmanagement