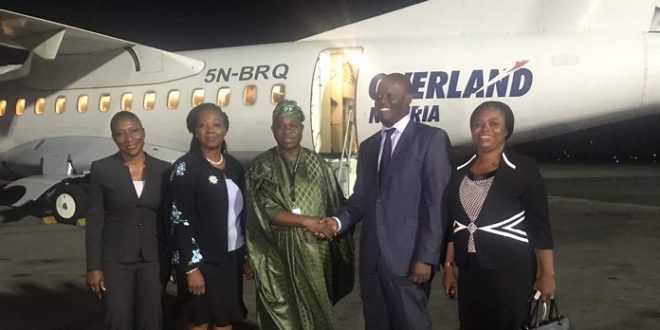 WITH its commencement of flight services into Cotonou, the Republic of Benin and Lome, Republic of Togo from Lagos, Nigeria Overland Airways has commenced facilitation of integration between the west African sub-region and open them up for trade and business amidst commendations.

He says: “There is no doubt that we need an airline to be operating between Benin Republic and Nigeria. Overland Airways will facilitate this economic integration between Nigeria and Benin. The dream of integration in West Africa cannot be achieved without effective transportation.”
Ambassador Oguntuase adds that Overland Airways’ flight services will aid industrialization. “Industrialization requires movement. Industrialists are very time-conscious; they look at time as money and they embrace anything that makes their movement fast. In this light, we welcome Overland Airways’ flight operations in Benin Republic,” he notes.

Mrs. Aduke Atiba, Executive Director of Overland Airways, says Overland Airways’ scheduled regional flight operations into Benin Republic is borne out of the airline’s commitment to provide services that will help to stimulate economic activities in Republic of Benin, Nigeria, and West Africa, and by so doing foster economic integration in the region.

Mrs. Atiba explains: “The West Africa region with a population of nearly 400 million people with diverse cultures and tourism cites is full of untapped trade, business and leisure opportunities which nationals from Republic of Benin, Nigeria, Togo and others in the region can take advantage of. The dire need to develop West Africa’s economies places on us a responsibility to act fast and professionally.”

After the stop-over at Cotonou, Overland commenced to the Gnassingbe Eyadema International Airport in Lome, Togo where its maiden flight was received by the Société Aéroportuaire de Lomé Tokoin (SALT) with a water canon salute in the presence of H.E.Olusola Iji, Nigeria’s Ambassador to Togo, Col. Dokisime Gnama-Latta, Director General, Togo Civil Aviation Authority, Mr. Christian Folly-Kossi, former Secretary General of Africa Airlines
Association (AFRAA), and many other dignitaries.

Managing Director, Overland Airways, Capt. Edward Boyo who spoke on the inaugural touchdown said: “Today, we share the joy of connecting brothers to brothers, sisters to sisters, communities to communities. We have removed the borders between Nigeria, Benin Republic and Republic of Togo. You don’t need a visa to move from Togo to Lagos or Cotonou to Lagos, all you need is Overland Airways. So we are here for you. We shall continue breaking the borders for the good of all Africa. Overland Airways has come to Togo to stay.

Capt. Boyo further emphasized: “It is possible for prosperity and economic development to come to our lands. We have come to Lome to stay. We are going to intensify the relationship between Nigeria, a very large economy in West Africa and Togo. There are about 400 million people in West Africa and we are not doing enough trade. Our people must trade with each other. That is what ECOWAS is all about. So the dream of our forefathers who dreamt of ECOWAS is being actualized today.”
Ambasador Iji says the commencement of Overland Airways’ flights services into Togo solidifies the Bilateral Air Service Agreement (BASA) between the two countries.
Also, Col. Gnama-Latta, who also represented Mr. Ninsao Gnofam, Togo’s Minister of Transport, says: “Overland Airways is coming into Togo at a time when great decisions like the Single African Air Transport Market (SAATM) are being taken at the African Union (AU). Interestingly, Togo and Nigeria signed the SAATM.”
He stressed the need for safe, fast and efficient means of commuting between Nigeria, the biggest country in Africa, and Togo. “For the business men and women, it is very important to leave Lome by 8pm, arrive in Nigeria, relax your head, wake up full of energy the next day, do your trade in Nigeria and come back to Togo by Overland
Airways’ flights,” he states.
The Lagos-Cotonou-Lome flights operate on Mondays, Tuesdays, Thursdays and Sundays. The flights depart Lagos at 19:00hrs, arrive Cotonou at 19:25hrs; and depart Cotonou at 20:00hrs to arrive Lome at 20:30hrs. Also, Overland Airways flights depart Lome at 21:00hrs to arrive in Lagos at 21:45hrs.

Nigerianflightdeck is an online news and magazine platform reporting business stories with a bias for aviation and travel. It is borne out of the intention to inform, educate as well as alter perceptions with balanced reportage.
Previous Aero set to return aircraft from France; to roll out second 737-5 after C-Check
Next Delta Air Lines, Kenya Airways enter codeshare agreement expand connectivity between U.S., Africa