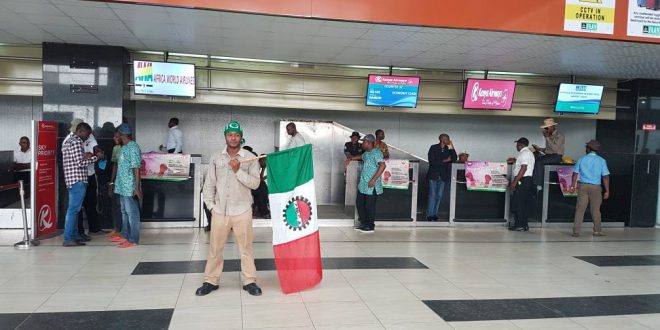 The unions disrupted passengers plans to complete their travel formalities to enable them meet the flight schedule for the day claiming the airline management had not kept its agreement with the unions.

National General Secretary of NUATE, Olayinka Abioye, said the clamp down of the airline is as a result of the failure of Kenya Airways Management to live up to their promises agreed after several dialogue to resolve the lingering issues bordering on the welfare of Nigerians working for the Airline. 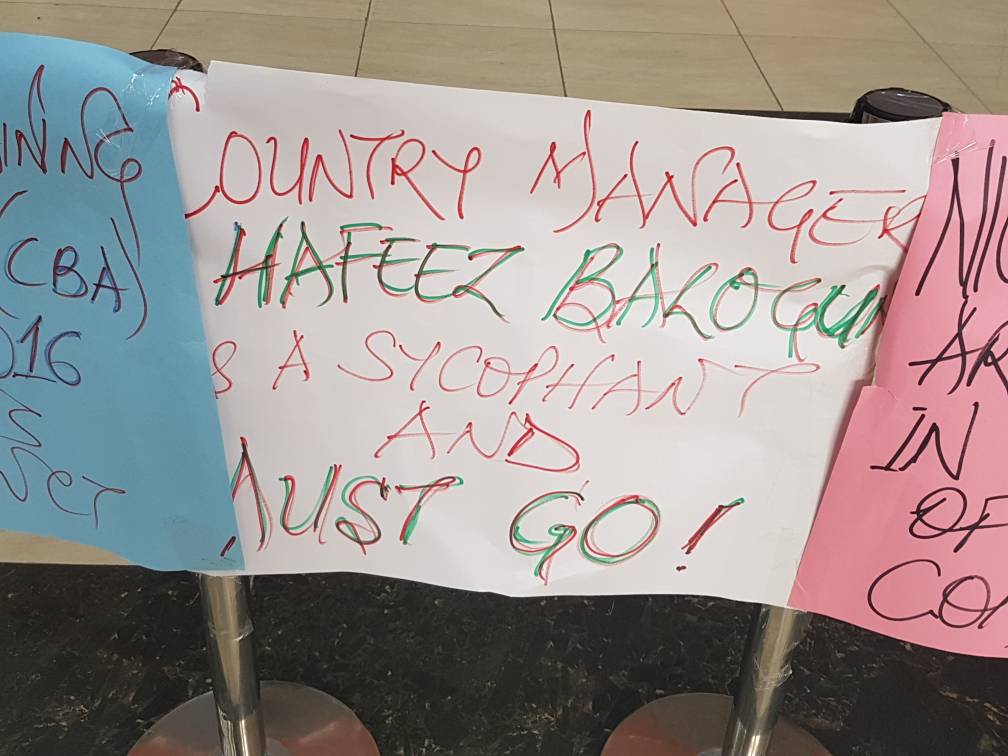 He said after due diligence with the Management in consonance with the International Labour Organization (ILO) collective bargaining principle, Management of the Airline had defaulted on all legitimate agreements which degenerated to the last option.

He said this would have taken place alot earlier but we had to reach KQ Management in Nairobi, Kenya and following the Commissioner of Police, Airport Command intervention truncated the picketing of the Airline until this day.

The Kenya Airline defaulted in the incremental welfare programme for her workers, review of the terms and conditions of Nigerian workers in the Airline which has lasted for close to two years, denying workers of their annual leave which goes against the Nigerian working rule that workers are entitled to 30days annual leave with full pay, amongst other reasons for the grounding of their operations and hoisting the NLC flag at their counter.
He said this arrangement will last until workers’ demands are met.

Stranded passengers expressed their displeasure of the incident.

Meanwhile all attempts to speak to the Management of Kenya Airlines prove abortive at the time of filing this report.

However, Consumer Protection Director of the Nigeria Civil Aviation Authority (NCAA), Alhaji Adamu Abdullahi who is abreast of the labor issues said that the affected passengers have been observed endorsed and Checked in on another flight, a RwandAir Flight WB 201(KGL) ETD 16:00hrs stating that, “Although the Airline is Presently in an enclosed door meeting with members of the Labour Unions and some Management Staff from NCAA Industrial Relations and Welfare Department.”
He further stated that one Mrs Grace a (NAHCO Staff attached to the airline) informed that 65 passengers were airlifted on Rwand Airline while the remaining 12 passengers have been accommodated at Airport Hotel, Ikeja.
This position was also confirmed by Mr Hafeez Balogun the Airline Country Manager, who further stated that the Labour impasse is still yet to be resolved so CPOs would keep following up accordingly.

Nigerianflightdeck is an online news and magazine platform reporting business stories with a bias for aviation and travel. It is borne out of the intention to inform, educate as well as alter perceptions with balanced reportage.
Previous FAAN gets commendations as it launches reviewed service charter
Next FAAN begins repairs on Enugu Airport runway, shuts runway down from 3pm