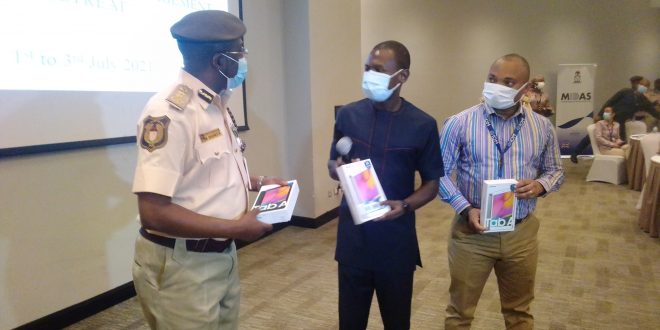 NIGERIA Immigration Service (NIS) has called on traditional rulers and residents in border communities to be actively involved in safeguarding the borders and discourage all forms of illegal migration and influx of settlers as it sets to review its Visa Policy (NVP 2020) and Border Management Strategy documents.

This is just as the Comptroller General of the NIS, Muhammad Babandede (MFR) has called on all third party custodians of the service’s data information to relinquish as the NIS’ Technology Building is ready and all the servers are set.

According to the CGI, an effective border management system and visa/residency administration policy is key to enhance the nation’s security architecture but also attract Foreign Direct Investments (FDIs) for enduring prosperity

He said,” As a country with expansive and extensive borderlines, we must be courageous enough  to  sincerely  interrogate  our  country  security  and  migration  management cover  with  a  view  to  discovering  our  strengths,  weaknesses  and  areas  of  urgent interventions.

“We need to re-examine our current investment on our relationship with members of border communities and the traditional institutions. I see a need to re-enforce, re-negotiate and perhaps revamp our current approach for meaningful engagements

He went on, “We have a huge opportunity in this meeting to critical interrogate our current efforts in these areas with a view to bringing about the desired reforms that will not only allow for improved service delivery but also enhance our relevance in the nation’s security and investment ecosystem.”

He also said that the government of Nigeria is committed to the Migration Information and Data Analysis System (MIDAS) through e-Technology calling on third party to bring back its data.

“The technology building is a building that will gather real time technology not only for Nigeria but the world so the government of Nigeria has invested massively in technology. With this technology building we want to take our data from third-party, and I urge the honorable minister that we are ready, all the servers are set. Those companies that have our data should bring it back to us because it is our data. If I don’t take it before I go, you take it when I’ve left”

Speaking earlier, Chief of Mission, International Organization for Migration (IOM), Mr. Frantz Celestin applauded the partnership between the Immigration and the IOM which has enabled the latter support Government of Nigeria to establish a reinforced management information system.

According to him, the system: Migration Information and Data Analysis System (MIDAS) has revolutionized the country’s border management operations which strengthened NIS’ digital data collection and storage capacity.

He said, “Nigeria has the largest and most complex MIDAS architecture in the world. All five international airports  in  Nigeria  have  been  covered  with  MIDAS,  29%  of  the  Seaports  and  16%  of  the  land borders and 7 state commands.  All five airports have online real time connectivity with INTERPOL 24/7 and supported with over 130 work stations and border management equipment.

“The foreigner  registration  system is  another  tool  that  the  NIS has  at  its  disposal to  effectively account for foreign nationals residing in the country and to regularize them when necessary.  First piloted at the NIS HQ and Cross-River State Command, the system is now operational in36 states.

Nigerianflightdeck is an online news and magazine platform reporting business stories with a bias for aviation and travel. It is borne out of the intention to inform, educate as well as alter perceptions with balanced reportage.
Previous Air Peace set to resume Warri, Freetown this July
Next NDLEA arrests 30 drug pushers in two months at MMIA