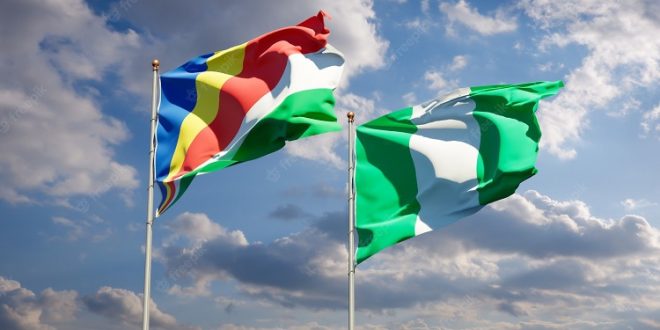 Flags of Seychelles and Nigeria

Nigeria, Seychelles ink BASA deal as both gear up for direct flights

Airlines from Nigerian and Seychelles may soon start negotiating direct flights following the approval of the Federal Executive Council( FEC) of the Memorandum on signing and ratification of Air Service Agreement between the Federal Republic of Nigeria and the Republic of Seychelles.

For both countries inking the Bilateral Air Services Agreement ( BASA) will promote air services and connectivity between them.

Minister of Aviation, Senator Hadi Sirika led officials of the Ministry to sign the BASA while the Republic of Seychelles Minister of Transport, Mr. Anthony Derjacques, signed on behalf of his country.

During the ceremony, the two Ministers underscored the importance of the BASA as it will promote air services and connectivity between both countries, enhance business, and promote tourism.

They both agreed that the signing would further promote the African Union Agenda 2063 and called on citizens of both countries to latch on the opportunities of the BASA for their mutual benefits.

The Ministry has also had discussions on how to further implement the open skies Agreement, signed 30 years ago, with the United States of America.

Nigerianflightdeck is an online news and magazine platform reporting business stories with a bias for aviation and travel. It is borne out of the intention to inform, educate as well as alter perceptions with balanced reportage.
Previous International Civil Aviation Day: Nigeria remains committed to ICAO’s ideals – Sirika
Next 7Star Global Hangar completes C-Check on Dana’s MD 83 aircraft