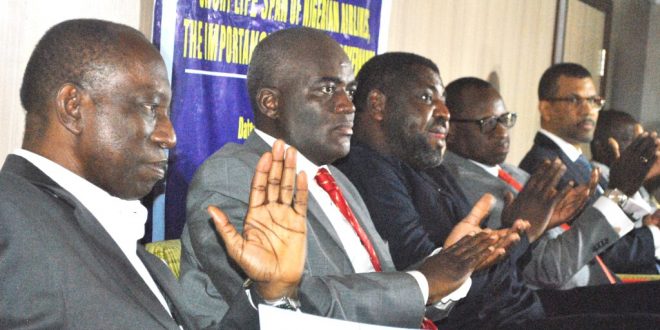 INDUSTRY players have reacted to the suspension of the national carrier project ‘Nigeria Air’ with a seeming general consensus that the airline was never meant to fly as it was ‘conceived on power point, shared on Adobe and died on Twitter’

These players made this known at the ongoing 4th quarterly Business Breakfast Meeting organized by the Aviation Safety Roundtable Initiative (ASRTI) at the Golfview Hotel Lagos.

Chairman of the occasion and Director of Studies, Centre for International Advanced and Professional Studies, Prof. Anthony Kila one of such players in his reaction to the project said, “Nigeria Air was conceived on power point, shared on Adobe and died on Twitter”.

According to Kila, the theme for this quarter’s meeting, Short Lifespan of Nigerian Airlines , The Importance of Corporate Governance is pertinent and if we’ll treated would empower stakeholders in the industry.

He said,” The Nigeria Air project was embarked on without due consultation and communication with people that matters. There was no industry engagement and when a project is DME like that it is bound to die. Nigeria should avoid this kind of failure .”

President of Aviation Roundtable (ART) Elder Gbenga Olowo who set the ball rolling at the Initiative said the think-tank believes the announcement to bring back the national carrier was a vote of no confidence on the existing airlines.

Olowo said, “The announcement of Nigeria Air in the last three years of President Buhari shook the industry. That announcement was a vote of no confidence on the sector; that the Airlines that are existing are not doing well. ‘We are going to float another airline’.

“And three years after we suddenly learnt that project is being suspended and that made all of us to start speculating why, how, what happened and we will continue to speculate until we hear exactly what happened. I will say that it destabilizes the sector because in planning with the Nigerian Airlines in the last three years, they would factor in that announcement. If I were to be the MD of a Nigerian airline, I would factor in the arrival of a very strong competitor”.

He challenged the Federal Government to come out and tell Nigerians whether the project was only suspended or it would be resuscitated.

Project Nigeria Air was suspended in September after a Federal Executive Council (FEC) meeting where no actual reasons for the suspension has been given, other than statements from Ministries of State, Aviation negating its counterpart in information, Culture and Tourism claims about investors not forth coming.

Speaking on the theme of the day, Chief Executive of Overland Airways, Captain Edward Boyo said airline operations in Nigeria was not for the weak of heart coupled with the general talking down of Nigerian airlines which is not helping their lots.

According to him, hubs are supposed to be created by local operators and not foreign airlines and talking down these local operators by all and sundry has become public entertainment.

” The challenged domestic airlines face are caused by Nigerians, we encounter delays because of the hostile environment and here you cannot run an airline without being politically savvy. Part of the reasons why Virgin Nigeria failed is because they superimposed foreign mentality into the system.”

” Nigerian airlines are operating aircraft of about 15-25years old but the key thing is not the age however, it is the airworthiness .”

Nigerianflightdeck is an online news and magazine platform reporting business stories with a bias for aviation and travel. It is borne out of the intention to inform, educate as well as alter perceptions with balanced reportage.
Previous Government cuts registration of business cost by half for 90 days
Next Overland Airways commences Niamey, enhances interconnectivity in West Africa