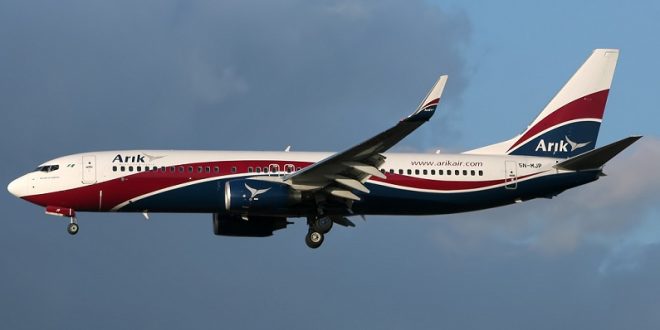 NCAA slams Arik Air US$150 per passenger fine, orders airline to ferry all luggage in 24hrs

Director consumer protection directorate NCAA,  Mr Abdullahi Adamu, who disclosed this in an interview with aviation correspondents at the International wing of the Airport at Ikeja shortly after addressing stranded irate Arik passengers said, the airline has violated the Montreal convention of 1999.

“The compensation for delayed luggage according to Montreal Convention of 1999 is $150 dollars ,Arik has failed in its duty because that compensation should have come the moment the passenger lands without his bag. They have not done that and they are agreeing with the passengers who agreed to waived part of his right to collect $50 dollars as against to $150 dollars”

Abdullahi said under normal circumstances, the passengers ought to have arrived with their luggage but regretted that over two days after arrival, their luggage were yet to arrive.

“We have also directed Arik to bring in the balance of their luggage for all passengers in the next 24 hours ,we have written Arik in that direction and they are complying but that does not stop sanction because violation has taken place”

Abdullahi who described the action of the airline as a national embarrassment appealed to passengers to bear with NCAA adding, that if the full sanction was applied that it will bring down the airlines but assured that the airline will definitely pay for the consequences of their action.

He warned all airlines  both domestic and foreign that sanctions will be meted out to them in the case of luggage default.

At the time of this report, arrangement was being made to get  launch and accommodation for the stranded  passengers.

There was no official of Arik on ground  but the managing director of the Federal Airports Authority of Nigeria, Engr Saleh Dunoma  led other airport officials to calm down  the irate passengers who threatened to deal with Arik staff .

Nigerianflightdeck is an online news and magazine platform reporting business stories with a bias for aviation and travel. It is borne out of the intention to inform, educate as well as alter perceptions with balanced reportage.
Previous Sirika optimistic of increased GDP contribution as world marks International Civil Aviation Day
Next SAA deploys A330-300 on Lagos-Jo’burg, enumerates setbacks on Nigerian market