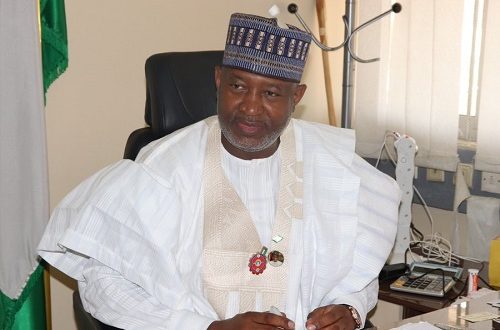 Minister of Aviation. Hadi Sirika has reacted whimsically to allegations that he plans to tear down the headquarters of the Federal Airports Authority of Nigeria (FAAN) and the Nigerian Airspace Management Agency (NAMA) stating ‘ assuming that is correct I wish it would happen tomorrow.’

The Minister responding to questions from the media in Lagos over planned demolition of FAAN, NAMA headquarters was asked why he did not site the Aerotropolis at the right of the Old Murtala Muhammed International Airport (MMIA) terminal where a vast array of land exists, Sirika instead debased the current FAAN structures without given reasons why the other side of the MMIA was not used.

“This chaos is what you want as an airport which is part of a roadmap? Don’t you want a rail link between the old domestic and international terminals, don’t you want that? Don’t you want somewhere there are cinemas, spars, shopping complex, malls? Rest areas, banks, airline offices and befitting headquarters for Lagos?

” So given the chance I will demolish all the headquarters, in fact I told someone I would demolish from Arik to Aero all the way to the police building and Bristow and put something befitting of Lagos.

He however said, this will not be done under the table and like other projects stakeholders would be carried along.

” We will not do this under the table. This is an executive function which we will tell stakeholders, because they have a right to know, we will not do it under the table I have not been known for that. If we want to demolish to make something better, nobody should stop us because we know it is for the good of the industry.

Another controversial areas with regards the timing and timeline for this demolition came up as the Buhari-led administration would be wounding up in June 2023 and the guaranty that the projects would be sustained by another, the minister said they came into power and completed projects of other administrations and the people should hold whatever government in power responsible if they abandon the projects.

He said,”when I came in as Minister from 2015 to 2019 the first time as Minister of state I embarked on 154 projects and at least 40% of them were started by somebody and out of 154, I delivered 137, 87% delivery rate and it’s on record. Some of the ones I started, you remember Abuja, Kaduna, Enugu.

” When we came this Abuja, Lagos, Port Harcourt, Kano, we met them at 10% others less than 10% with lots of challenges, lack of foundation, lack of water in the plan I wanted to abandon those projects give it to private sector to finish and get their money from it but President Buhari said they should be finished and we finished and handed over those projects 100%

“Therefore, so long as you put in place the mechanisms to ensure whoever comes will not reverse, cannot go back. Be rest assured we are going to put the mechanisms in place to ensure whoever comes even if he is my hater, will ensure those things will happen. I’m challenging stakeholders, users, and the press and the staff and the management of these agencies to pursue him/her until they complete it.

Recall, the Minister had in directed the relocation of the Accident investigation Bureau ( AIB) to Abuja to tear down their office building with about N5 billion worth of equipment to make way for an apron expansion at the new MMIA terminal, the torn down facility months after that has been over taken by sellers as the project remains stalled.

Nigerianflightdeck is an online news and magazine platform reporting business stories with a bias for aviation and travel. It is borne out of the intention to inform, educate as well as alter perceptions with balanced reportage.
Previous Court issues interim injunction, stops Nigeria Air after Minister’s ‘no court can stop project’ jibe
Next MamaJ Aviation Consult holds 6th annual career conference